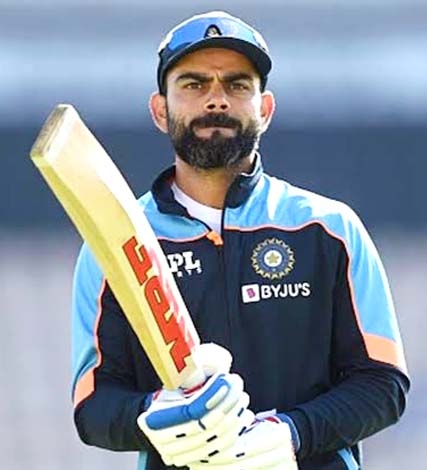 AFP, Dubai :
Virat Kohli will be looking for a fairytale ending to his leadership of India's Twenty20 team as he chases an elusive first major title at the World Cup.
The 32-year-old Kohli will step down as T20 skipper after the 16-nation tournament in the United Arab Emirates and Oman that starts on Sunday. The prolific run-scorer has also quit as captain of Indian Premier League side Royal Challengers Bangalore and many have welcomed his decision to concentrate more on his batting.
Kohli had been at the centre of growing speculation in recent months as the wait for success grew.
Former India all-rounder Irfan Pathan said Kohli can go into the World Cup, that will start for them against Pakistan on October 24, with no pressure and that will be good for the team. "I think he will enjoy his cricket more now after taking this decision," Pathan, who played a key role in India's inaugural T20 World Cup triumph in 2007, told AFP.
"India will do well with the side, the confidence and the experience they have."
Kohli became captain across all formats after M.S. Dhoni relinquished his limited-overs leadership in 2017. But India have not won a World Cup or Champions Trophy since.
Kohli will still have Dhoni by his side as the former captain, who led India to the T20 title in 2007 and the 50-over crown in 2011, is the team mentor for the tournament.
Kohli was closing in on his India debut when Dhoni's team created history by winning the first world T20 title in Johannesburg. The triumph triggered a T20 boom across South Asia and led to the birth of the IPL in 2008.
After making his ODI debut in 2008, Kohli soon created his own brand of cricket but has faced pressure over his failure to win a global title.
India, the hosts and led by Dhoni, lost in the semi-finals to eventual winners West Indies despite an unbeaten 89 by Kohli in 2016.
India also bowed out in the final four three years later, under Kohli, in the ODI World Cup.
India remain one of the favourites to lift the T20 trophy in Dubai on November 14 alongside holders West Indies and Eoin Morgan's England.
Pitched against old rivals Pakistan, New Zealand, Afghanistan and two other qualifying teams in Group B, India are hoping for a smooth path to the semi- finals.
"I will always want India to win, but West Indies will be one of the favourites," added Pathan.
"England and Australia all have good attacks and you can never count out Pakistan. It will be a very, very competitive World Cup."
All 15 Indian squad members, and three standby players, have been in the UAE for over a month with their IPL teams getting used to the pitches in Dubai, Abu Dhabi and Sharjah.
Swashbuckling opener Rohit Sharma is widely tipped to be Kohli's successor as T20 captain and will also be key to the team's chances.
The in-form K.L. Rahul and wicketkeeper-batsman Rishabh Pant complete the top order batting spearhead while Mohammed Shami and Jasprit Bumrah will lead the pace attack.