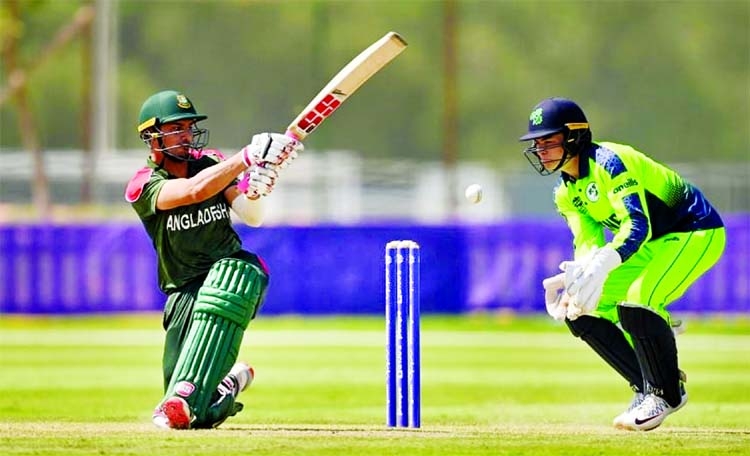 Nurul Hasan Sohan (left) of Bangladesh hits a ball, while wicketkeeper Neil Rock of Ireland looks on during their ICC T20 World Cup warm-up match at Abu Zayed Stadium in Dubai on Thursday.

Sports Reporter :
Bangladesh lost to Ireland by 33 runs in their ICC T20 World Cup warm-up match at Sheikh Zayed Stadium in Abu Dhabi on Thursday.
Electing to bat first, Ireland piled up a mammoth total of 177 for the loss of three wickets in the stipulated 20 overs.
In reply, Bangladesh were all out for 144 off 20 overs.
Bangladesh faced an early debacle as they lost three wickets for 15 runs.
Then Soumya Sarkar and Afif Hossain repaired the damage contributing together 37 runs in the fourth wicket stand before Afif Hossain was caught by Paul Stirling off Ben White when Bangladesh's total was 52 for the loss of four wickets.
After Afif Hossain's dismissal, Soumya Sarkar and Nurul Hasan adding together 30 runs for the fifth wicket partnership before Soumya was run out by Harry Tector when Bangladesh's score was 82 for the loss of five wickets.
Soumya hit a notable 37 from 30 balls featuring two sixes and a four.
After Soumya's departure, Bangladesh failed to make any notable partnership.
Nurul Hasan Sohan struck a splendid 38. His 24-ball innings was decorated with six fours.
Besides, Afif Hossain and Taskin Ahmed were the other two Bangladesh batsmen who reached the double digit figures.
Afif Hossain scored 17 runs, while Taskin Ahmed remained unbeaten with 14 runs.
Mark Adair grabbed three wickets at the cost of 33 runs, while Craig Young and Josh Little bagged two wickets each instead of 21 and 22 runs respectively.
Besides, Simi Singh and Ben White took one wicket each for 19 and 37 runs respectively.
Earlier, one-down Gareth Delany remained unbeaten with 88. He hit eight sixes and three fours.
Besides, Andy Balbirnie, Harry Tector and Paul Stirling added 25, 23 and 22 runs respectively to the Ireland total.
Right-arm pacer Taskin Ahmed bagged two wickets in the space of 26 runs, while Nasum Ahmed took one wicket for 33 runs.