Light at the end of Karnaphuli tunnel 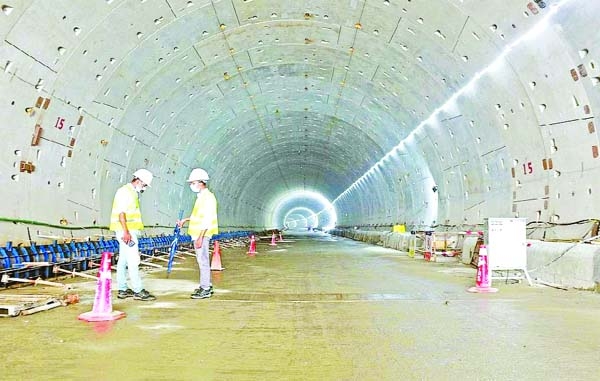 UNB :
The Bangabandhu Tunnel under the river Karnaphuli, first of a kind in Bangladesh is expected to be open for vehicular movements next year, and it could even be well ahead of the scheduled time of December 2022.
Confirming the information, Harunur Rashid Chowdhury, project director of Karnaphuli Tunnel said: "One of the positive aspects of this project is that its duration and cost have not been increased. The work is being completed within the stipulated time." Â
"There is a possibility that the construction works might even end earlier than scheduled," he added.
The project director further said that manpower and equipment have been increased to speed up the work.
"Work is going on in full swing. We are working towards the goal of opening for moving vehicles through the tunnel before the end of next year."
The construction work of the dream project
reached a major milestone with completion of all boring-related work last Thursday, that arrived with the excavation of the second tube (from Anwara end of Chittagong to Patenga end) of the 3.315-km tunnel.
The boring work of the first tube was completed in the first week of August last year.
Project sources said 73 % construction work of Karnaphuli tunnel has been done and dusted. In the first year after it opens to vehicular movement, some 6.3 milli0n (63 lakh) vehicles will pass through this tunnel.
Most of these vehicles will be container trailers, various types of good laden trucks and covered vans.
Besides, tourist buses, cars and other vehicles can also move through the tunnel, making lives much easier for the national and international tourists.
Work is currently going on to complete 5.35km of approach roads on either side of the tunnel.
More than 360 acres of land have been acquired for the construction of roads and installments of utility lines and another 20 acres are to be acquired soon.
Once completed, the tunnel can be used as an alternative road from the Port City to Cox's Bazar, Teknaf, Matarbari and northern Chittagong.