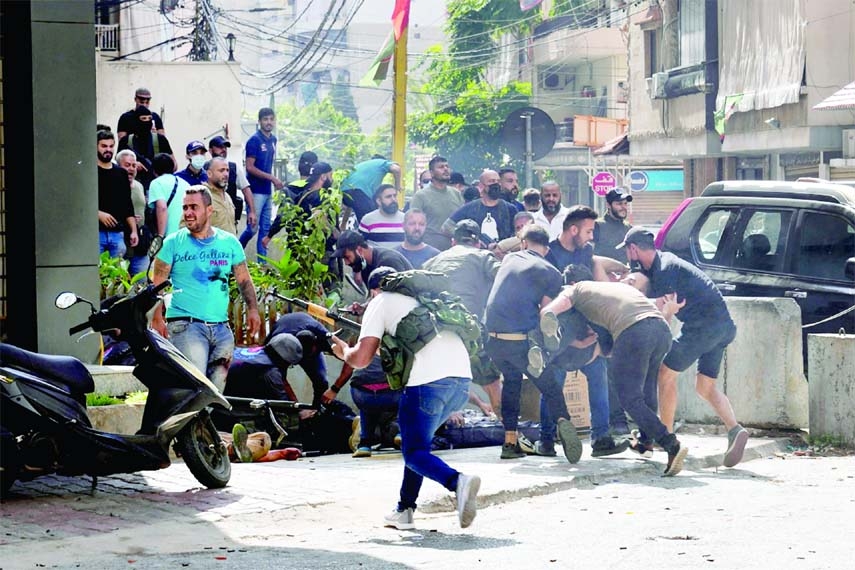 Supporters of a Shia group allied with Hezbollah help an injured comrade during armed clashes that erupted in the southern Beirut suburb of Dahiyeh on Thursday.

AP :
Armed clashes erupted Thursday in Beirut during a protest organized by the Lebanese militant group Hezbollah and its allies against the lead judge probing last year's blast in the city's port. At least six people were killed and dozens were wounded in the most protracted and violent street fighting in the city in years, authorities said.
The exchanges of fire along a former front line from the 1975-90 civil war involved pistols, automatic rifles and rocket-propelled grenades, and were reminiscent of that conflict. Gunfire echoed in the capital for several hours and ambulances, sirens wailing, rushed to pick up casualties. Snipers shot from buildings. Bullets penetrated apartment windows in the area.
It was not immediately clear what triggered Thursday's violence.
Tensions had been running high after the Iran-backed Hezbollah and its Shiite allies from the Amal Movement demanded the removal of Tarek Bitar, the judge leading the investigation into last year's massive port explosion. The two parties called for a protest nearÂ Â Â  Â
the Justice Palace, located along the former front line between Muslim Shiite and Christian areas.
In a statement Thursday, the two groups said their protesters came under fire from snipers on rooftops.
The violence unfolded while U.S. Undersecretary of State for Political Affairs Victoria Nuland was in town, meeting with Lebanese officials. Her schedule was slightly thrown off by the action on the streets.
Nuland later told an airport news conference that an impartial judiciary is the guarantor of all rights, in apparent criticism of Hezbollah. "The Lebanese people deserve no less and the victims and the families of those lost in the port blast deserve no less," she said. "Today's unacceptable violence makes clear what the stakes are."
The demands for Bitar's removal and calls for protests upset many who considered it blatant intervention in the work of the judiciary.
The right wing Christian Lebanese Forces mobilized supporters Wednesday evening after Hezbollah and Amal called for the protest at the Justice Palace, located in a Christian area. Videos circulating on social media showed supporters of the Christian Lebanese Forces marching in the streets, carrying large crosses.
As the clashes erupted, a journalist with The Associated Press saw a man open fire with a pistol and gunmen shooting in the direction of protesters from the balcony of a building. Several men fell immediately from the gunfire and bled on the street. The army deployed heavily and sent patrols to the area to search for the gunmen, following the exchanges of gunfire between the Muslim and Christian sides of the capital.
Lebanese authorities said at least six people were killed and 30 wounded. A staffer at the emergency room at al-Sahel hospital said they received three bodies and 15 people who were wounded. One of the dead, a woman, had received a bullet to her head. Two of the injured were in critical condition.
Four projectiles fell near a private French school, Freres of Furn el Chebbak, causing panic, a security official said, speaking on condition of anonymity because he was not authorized to speak to the press.