US Navy says sailors who refuse vaccine will be expelled 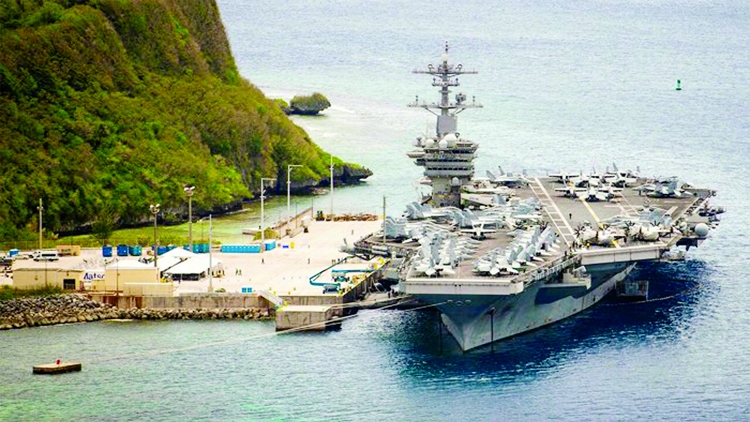 BSS :
The US Navy said on Thursday that personnel who refused to be vaccinated against Covid-19 will be expelled from the force, ahead of the November 28 deadline for the injection.
"With Covid-19 vaccines now mandatory for all military members, the Navy has announced plans to start processing for discharge those who refuse vaccination without a pending or approved exemption," it said in a statement.
It was the first clear indication by the Pentagon of what would happen to service members who reject the vaccines, which became mandatory at the end of August.
Until now military officials had avoided answering what would happen to those who refuse to be vaccinated.
The navy said that 98 percent of its 350,000 active duty members had begun or completed the vaccination process.Â  For the US military overall, Pentagon spokesman John Kirby said Tuesday that 96.7 percent of the nearly 1.4 million active duty personnel had received at least one dose, and 83.7 percent two doses.
Including military reserves, though, the level was just 80 percent with at least one dose.
If all the services take the same hard line that the navy is taking, it risks losing as many as 46,000 troops, though presumably more will accept vaccinations before the deadline.
Â Vice Admiral John Nowell, the chief of naval personnel, said the navy force has been hit with 164 coronavirus deaths since the pandemic began.
Â Of them 144 were known to have not been immunized, while the status of the other 20 was unclear. People expelled for refusing the vaccine will receive a general honorable discharge, but could lose certain benefits or be forced to repay the cost of training and education in some cases, the statement said.
Â Navy personnel who can claim an exemption from mandatory vaccines, for health or other reasons, can be reassigned from their current duties.
The navy has been particularly sensitive to the pandemic, because of the risk that a single Covid case could infect an entire ship or submarine at sea, forcing it out of action.Â  Last year the aircraft carrier USS Theodore Roosevelt was struck by an outbreak that infected around a quarter of the 4,800 crew, forcing the warship to remain in port in Guam for disinfection for several weeks.