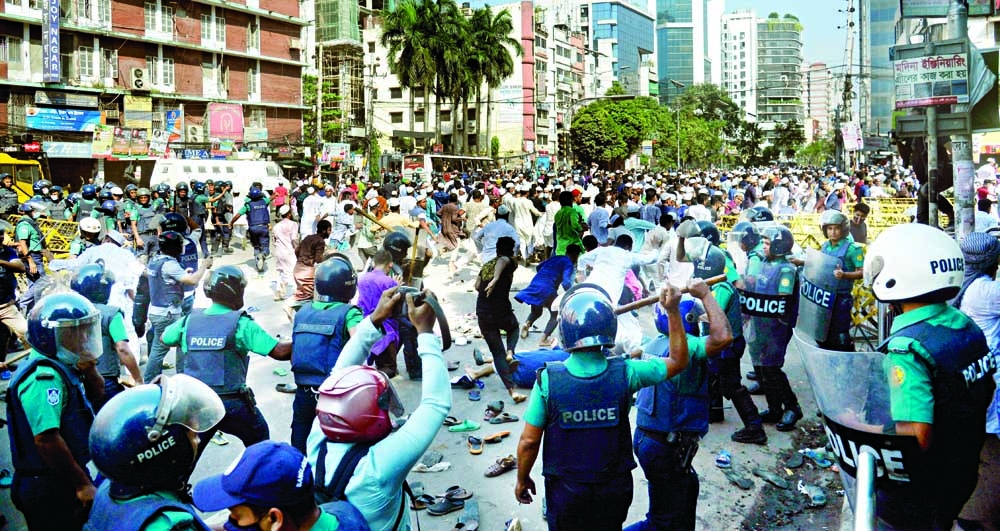 Protesters clash with police in Dhaka\'s Kakrail intersection on Friday afternoon following a procession which was brought out from Baitul Mukkaram Mosque to protest the alleged \'desecration\' of the Holy Quran in Cumilla. NN photo

News Desk :
Hundreds of protesters have clashed with police at Kakrail after they brought out a procession from the Baitul Mukarram mosque to protest the alleged "dishonouring" of the Quran in Cumilla.
Protesters under the banner of 'Malibagh Muslim Samaj' took out the procession following the Jummah prayers on Friday, reports bdnews24.com.
A clash with police took place at the Nightingale intersection in Kakrail, when police prevented the protesters.
"We allowed the procession to reach the Nightingale intersection, but the protesters created chaos there; then the police fired teargas shells to bring the situation under control," said Deputy Commissioner of Police Mohammad Abdul Ahad.
As the procession split up at the Nightingale intersection, the protesters swooped into alleys and started throwing brickbats at the police.
The police then retaliated by firing tear gas shells and shotgun bullets to disperse them. One of the protesters was apprehended by the police after an hour-long chase across alleys. The law enforcers barred traffic in the area while scanning the streets with APCs and water cannons.
Traffic was halted for more than half an hour in Gulistan and Paltan, before returning to normal around 3 pm.
Meanwhile, a man was killed on Friday when miscreants brought out a rally and carried out an attack on an area in Noakhali's Begumganj upazilas, according to media reports.
The deceased was identified as Jatan Kumar Saha, 42, said Noakhali Additional Superintendent of Police (Circle Begumganj) Md Shah Imran as quoted in media reports.
A total of 17 people, including Officer-in-Charge (OC) of Begumganj police station Kamruzzaman Sikder, were injured in the attack, he added.
According to the police, the mob marched near College Road and DB Road in Begumganj on Friday afternoon and vandalized the area.
On Wednesday, tension erupted among locals in Comilla after news broke on social media about the alleged desecration of the Holy Quran at a Durga Puja venue on the banks of Nanuar Dighi.
At one point, the situation started to get out of control and trouble started spreading to a number of puja venues in the adjacent areas. The local administration and police had come under attack while trying to restore order, reports our correspondent.
Later in the afternoon, RAB and BGB troopers were deployed to bring the situation under control.