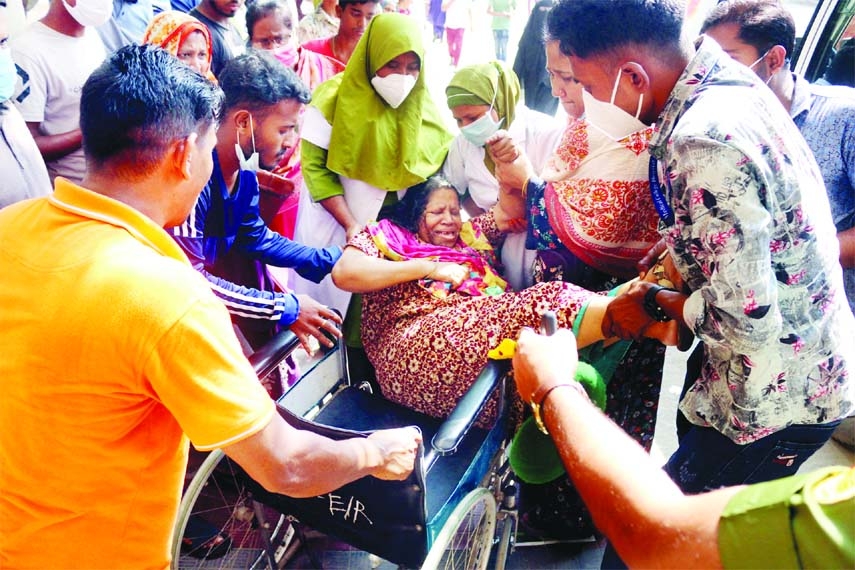 Firefighters and relatives carry an injured woman out of Dhaka\'s Mugda General Hospital after a fire broke out during maintenance work at an empty ICU on Thursday.

bdnews24.com :
At least nine workers have been injured or burnt after an explosion and subsequent fire during maintenance work at an empty ICU in Dhaka's Mugda General Hospital.
A blast occurred at the ICU on the sixth floor of the hospital around 12:30 pm, said Khondker Toufique, the personal assistant to the hospital director. The floor layout at the hospital has the cath lab, ICU and operation theatre next to each other.
Firefighters came to the scene and brought the blaze under control, he said.
There were no patients in the ICU at the time, said Mugda Medical College Prof Dr Ahmedul Kabir. All of the injured were hospital workers, he said.
Seven firefighting units were dispatched to the scene once the incident was reported, said Fire Service Control Room official Enayet Hossain. The fire was brought under control at 12:58 pm.
Nine Mugda Hospital workers were sent to Dhaka Medical after the fire. The eight who suffered burns have been admitted to the Sheikh Hasina National Burn and Plastic Surgery Institute and the other to the hospital's Casualty Department, said DMCH Police Outpost SI Bachchu Miah.
The ICU had previously been occupied by COVID patients, said Mugda Medical Prof Ahmedul Kabir. As the COVID infection rate has dropped, the ICU was being prepared for the use of other patients.
"There were no patients there at the time of the incident. Workers were cleaning it."
Among those who suffered burns, Staff Nurse Rumi Khatun and Mary Akhtar have been admitted to the Emergency Department of the Burn Institute. Senior Nurse Monica Perreira and Shaheena Akhtar have been taken to the ICU.
Renovation work was underway on the COVID ICU so that it could be used as a regular ICU, Mary Akhtar, one of the victims, told bdnews24.com.
She says she was in the ICU section when she heard a blast and a scream, opened the door and had her arm burned by the fire. She believes the fire was caused by a cath lab air conditioner explosion.
Staff Nurse Rumi Khatun's account was similar. But the fire service says the cause of the fire will only become clear after an investigation.