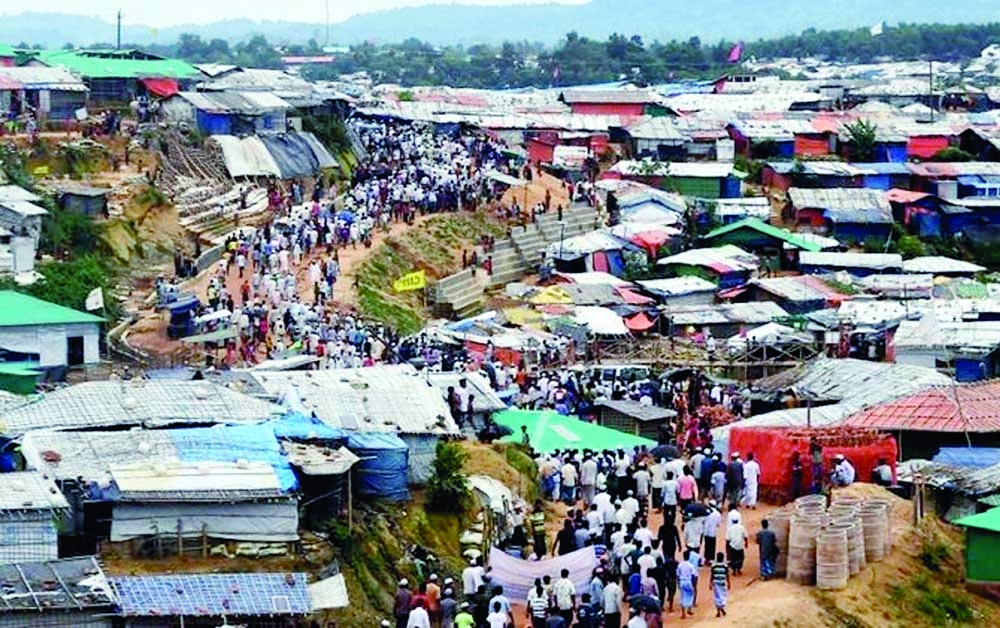 More than a million Rohingyas live in a cluster of camps in Cox\'s Bazar, with most having fled Myanmar during a military crackdown in 2017. Agency photo

Kazi Zahidul Hasan :
A climate of fear has spread across sprawling Rohingya refugee camps in Cox's Bazar as criminal gangs continue to lock in deadly clashes over asserting supremacy within the camps.
Two armed groups of Rohingya refugees clashed on Friday morning in Cox's Bazar's Balukhali camp, leaving at least seven dead and 10 injured, officials confirmed.
The latest incident comes on the heels of murder of a prominent Rohingya leader Mohibullah, 46, chairman of the Arakan Rohingya Society for Peace and Human Rights (ARSPH).
He was brutally shot to death by unidentified gunmen at Kutupalong camp on September 29 amid growing security vulnerabilities and the simmering tensions between Rohingya criminal groups active in 34 camps in Cox's Bazar.
Mohibullah was documenting the Myanmar military's crimes against the Rohingya and advocating for the refugees' rights and repatriation in international forums. He had faced death threats in recent years for his work.Â
Sources said at least 20 Rohingya groups are engaged in at least 12 types of crimes, including killing, abduction, rape, drug trafficking and robbery.Â  Some of the gangs are known as "Munna Group", "Hakim Group," "Salman Shah Group", "Putia Group", "Nabi Hossain Group," "Munna Group," "Saddam Group," "Rocky Group," "Sukkur Group" and "Jokir Group".
"Clashes often break out among these groups to establish supremacy and control over the Rohingya camps," one Rohingya refugee at Kutupalong camp told The New Nation yesterday asking not to be named. Â
Each of the groups has at least one hundred members, he added.
"Fear and panic gripped Rohingya refugees following repeated incident of killings. We are now living in a fear of what will happen next."
Regarding security at the Rohingya camps, the refugee said, "The government forces remain on duty during the day. But armed gangs come out after the sunset. In fact, there is no law and order at the camps at night. Members of criminal gangs fled before dawn to the hilly forest of Teknaf and they live there."
According to the Cox's Bazar district police, the crimes by Rohingyas is on the rise. In the last four years, there have been 1,300 cases against Rohingyas in Cox's Bazar for 12 types of crimes, inluding murder, rape, kidnapping, robbery, arms and drug trafficking, human trafficking, and assault on police.
A total of 2,870 Rohingyas have been made accused in these cases.
Besides, 234 people have been killed in clashes in Rohingya camps in the last 49 months.
When asked, Home Minister Asaduzzaman Khan Kamal said, "Sprawling camps in Cox's Bazar house about 1.2 million Rohingya refugees who fled Myanmar's Rakhine state after a deadly military crackdown in August 2017. It is difficult to ensure security for such a big population in a congested area."
Despite the fact, he said, "We have already made necessary security arrangement within the refugee camps. Members of RAB, Armed Police Battalion (APBn), police, and intelligence agencies have been deployed at the Rohingya camps in Ukhia and Teknaf to maintain law and order.
Kamal also said construction of barbed wire fences around the camps is in the final stages.
Commenting on Friday's bloodshed at Rohingya camp, Asaduzzaman Khan Kamal said, "The law enforcers have already begun operations to detain perpetrators behind the killings. Besides, security measures at the camps beefed up to avert any further untoward situation."
He also said crimes have increased at the Rohingya camps in Cox's Bazar due to the prolonged stay of the refugees. Besides, those have been involved in secret killings and chaos at camps may have link with foreign elements. (Additional Reporting by Cox's Bazar Correspondent.)Â