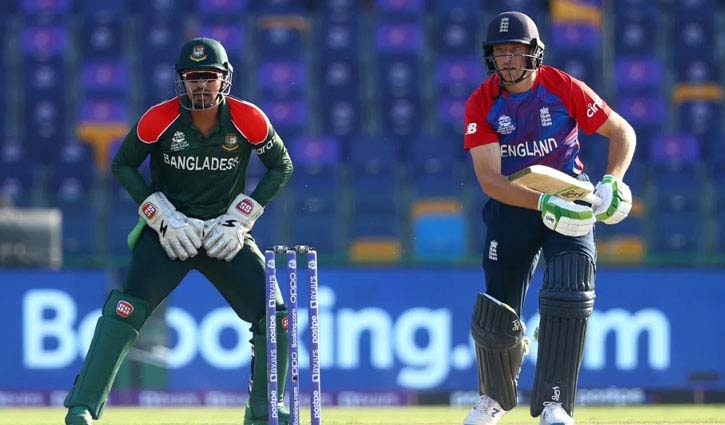 Bangladesh capitulated to England by eight wickets in their second match of the Super 12s stage of the T20 World Cup on Wednesday at Abu Dhabi.
Winning the toss Bangladesh batted first in this match but they failed to post a challenging total. They tumbled for 124 for nine in 20 overs.
In reply, England chased the target of 125 in 14.1 overs with Jason Roy hitting the highest 61 off 38 balls.
Shoriful Islam and Nasum Ahmed took one wicket each for Bangladesh.
Earlier, Mushfiqur Rahim was the highest run-getter for Bangladesh scoring 29 off 30 balls. Most of the Bangladesh batters displayed lean performance in the middle.
Liton Das failed once again as he was dmissed for 9 runs despite having a good start hitting Moeen Ali for two boundaries.
Moeen removed Liton and Mohammad Naim in two consecutive deliveries. Shakib Al Hasan came to bat at number three but failed this time.
Shakib added only four runs off seven balls.
On the fourth wicket, Mushfiqur Rahim and Mahmudullah Riyad made a partnership.
At the end of the 10th over, Bangladesh were batting for 60 for three with Mushfiqur and Mahmudullh were not out for 27 and 13 respectively.
Mushfiqur fell for 29 off 30 balls after adding 37 runs in the fourth wicket with Mahmudullah.
Nasum Ahmed, who came in at nine, scored 19 off 9 balls with two sixes. None of the other Bangladeshi batters was able to hit a six.
For England, Tymal Mills bagged three wickets with two in the last over while Moeen Ali and Liam Livingstone took two wickets each.
Bangladesh made one change to the playing XI including Shoriful Islam to replace Mohammad Saifuddin who was ruled out due to a back injury.
In the next matches of the Super 12s, Bangladesh will take on West Indies, South Africa and Australia.