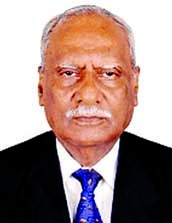 Staff Reporter :
Abdul Baset Majumder, former President of the Supreme Court Bar Association (SCBA), has died at the age of 83.
The veteran lawyer breathed his last at around 8:15 am on Wednesday while undergoing treatment at United Hospital in Dhaka, his son Advocate Saeed Ahmed Raja said.
He was also the Vice-Chairman of the Bangladesh Bar Council and a member of Awami League's advisory council.
He was suffering from various age-related complications, including spine problems. He was admitted to the hospital on Oct 23 due to lung complications.
His son said that his father was taken to the ICU on Oct 24 after suffering a heart attack.
Prime Minister Sheikh Hasina and Chief Justice Syed Mahmud Hossain have expressed grief at the death of the renowned lawyer.
His namaz-e-janaza was held on the Supreme Court premises after the Zuhr prayers on Wednesday.
After the namaz-e-janaza, floral wreaths were placed on behalf of the President, the Prime Minister and the Chief Justice and from different organisations.
Chief Justice Syed Mahmud Hossain, other judges of the Appellate Division of the Supreme Court, High Court division judges, Law Minister Anisul Huq, Railway Minister Nurul Islam Sujan, Fisheries and Livestock Minister SM Rezaul Karim, Dhaka South City Corporation Mayor (DSCC) Sheikh Fazle Noor Taposh, Attorney General AM Amin Uddin and Supreme Court Bar Association Secretary Barrister Ruhul Quddus Kazal, among others, were present in the janaza.
Later, his body was taken to his village home in Cumilla and finally he was buried in a family graveyard after another namaz-e-janaza.
Majumder was born on Jan 1, 1938 in the village of Shanichon in Cumilla's Lalmai Upazila.
After obtaining a law degree from Dhaka University, he joined the legal profession and got enlisted as a lawyer in the Dhaka High Court in 1967.
Meanwhile, functions of the both divisions of the Supreme Court and Dhaka Judge court were suspended on Wednesday in honour of Abdul Baset Majumder.
As a result, the verdict in a case against Shafat Ahmed, the son of an Apan Jewellers co-owner, and four others over the alleged rape of two university students at the Raintree Hotel in Dhaka will not be delivered yesterday.
"The Dhaka Bar Association is mourning the death of senior lawyer Majumder. The trial proceedings of the lower courts will be suspended today to show respect to him," Additional Public Prosecutor Tapash Kumar Pal said.