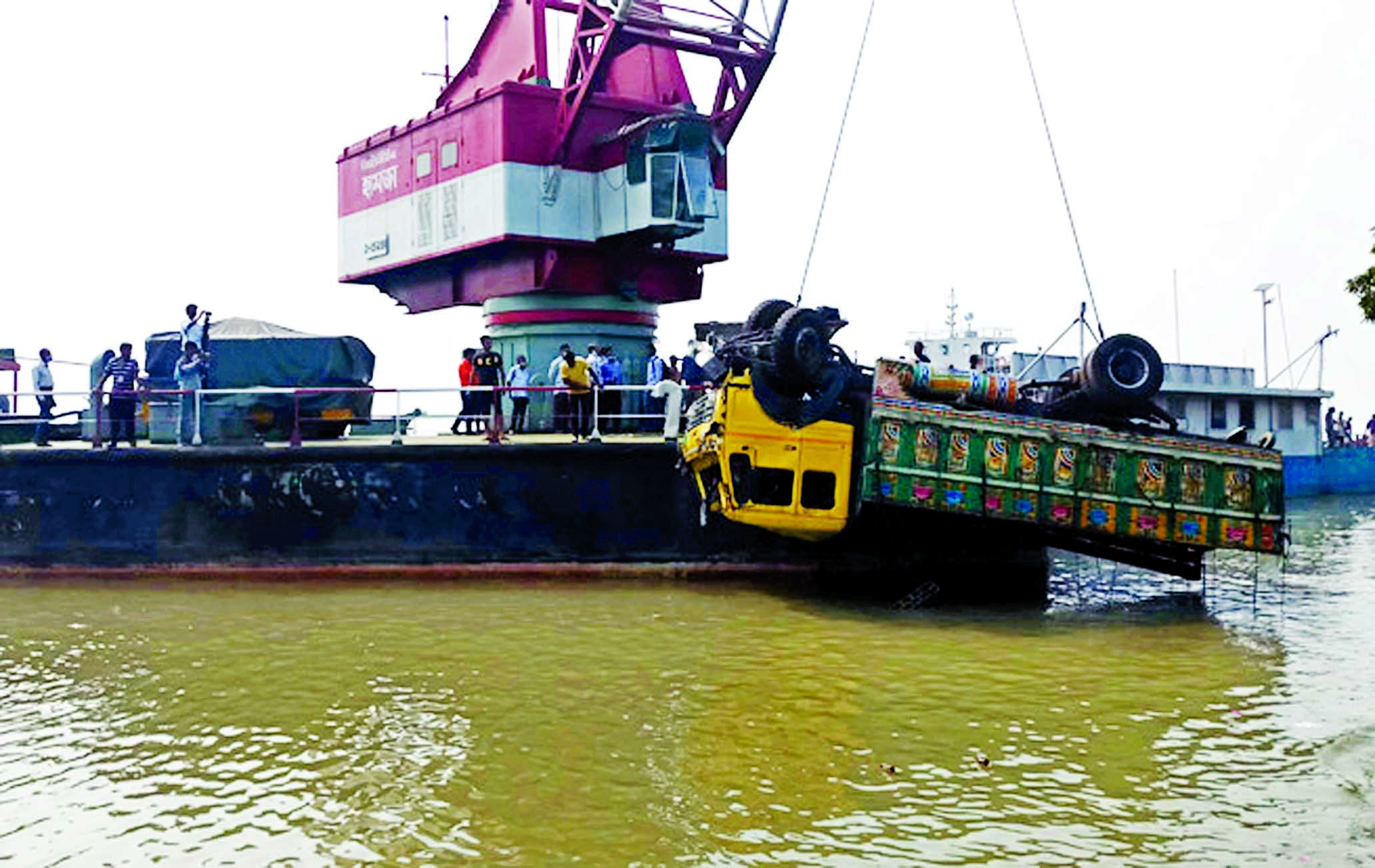 A Ro-Ro ferry with 17 loaded trucks and coverd vans sinks at Paturia dock in Manikganj on Wednesday. NN photo

Staff ReporterÂ  :
A ro-ro ferry named Amanat Shah, carrying 17 vehicles and some passengers, capsized in the Padma River close to the Paturia ferry ghat in Manikganj district on Wednesday morning.
The incident occurred around 9:45am when the ferry docked at terminal No 5.
Bangladesh Inland Water Transport Authority (BIWTA) Deputy General Manager (Aricha) Md Zillur RahmanÂ  confirmed the matter to the media saying that the ferry, which was carrying trucks, covered vans and motorcycles, sank right after a few vehicles unloaded.
However, no casualties have yet been reported.
According to Shafiqul Islam, Master of the Shah Amanat ferry, said that this is one of the old ferries which was built in the 1980s. According to the law, there is no opportunity to operate a boat beyond the age of 40.
Besides, the vessel was faulty and had undergone heavy servicing just four months ago.
Interestingly, recently a hole was discovered at the bottom of the ferry and when it started from Daulatdia on Wednesday morning with 17 heavy vehicles, water started entering the vessel.
Shafiqul said by the time he realised what was happening, but it was too late.
When it sank near the Paturia. Most of the passengers had managed to swim ashore at the time.
After the incident, emergency responders including fire service officials reached the spot and started the search and rescue operation instantly.
In the meantime, rescuer vessel Hamza reached the site and joined the rescue efforts. However, officials are unsure whether the 60-ton-capacity salvage vessel will be able to drag the nearly 400 ton capsized ferry.
Another salvage ship has been already on its way to help Hamza, said officials.
Meanwhile, a seven-member inquiry committee has been formed by the Ministry of Shipping to investigate the Ferry incident.
The committee has been also asked to submit a report to the shipping secretary within the next seven working days.
Citing witnesses an official said, "I've heard that three trucks were swept away. The ferry was also carrying a few motorcycles and private cars." More details will come in the course of the rescue operation, he added.
Rajbari MP Kazi Keramat Ali visited the terminal upon hearing news of the accident while en route to Dhaka.
He pointed out that the accident occurred near the wharf, indicating that the consequences could have been much worse if the vessel capsized in the middle of the river.
Shivalaya's UNO Jesmin Sultana, who was also at the terminal, said "four or five vehicles" managed to get off the ferry before it overturned.
"Then it suddenly capsized. We have learned that there was a total of 17 trucks and quite a few passengers on board. By the time the ferry started tilting, the majority of the passengers had disembarked. We haven't received any reports of casualties."
A probe panel will be constituted to look into the cause of the accident, she added.
The Bangladesh Inland Water Transport Corporation (BIWTC) has formed a seven-member probe committee to investigate the capsize of the RoRo ferry Amanat Shah in the Padma River at Paturia ferry terminal in Manikganj on Wednesday.
Officials said ferries usually stay in operation for 20 years, but the RoRo ferry bought from Denmark had been running since 1980.
BIWTC Chairman Tajul Islam said, "We have formed a high-level committee to investigate this matter. Ferries don't usually capsize like that, so we have formed the committee with experts from Bangladesh University of Engineering and Technology (BUET)."
The committee will be led by Shipping Ministry Additional Secretary Sultan Abdul Hamid, and includes an ICT expert from BIWTA, an examiner from the Department of Shipping, an associate professor of the naval architecture and marine engineering department of BUET and three other relevant officials.Â  Â
Meanwhile, the BIWTC chairman confirmed that the ferry had been bought from Denmark in 1980 and that its engine had undergone modifications. "The normal lifespan of a RoRo ferry is 20 years, but they can easily keep running by modifying the engine if the body is still seaworthy," he said.
Officials of the Ministry of Shipping said the probe committee has been asked to submit its report within seven working days.
Shipping Ministry Additional Secretary Sultan Abdul Hamid said they would be able to say what happened with the ferry after visiting the location.
The vehicle-laden ferry capsized around 9:45am on Wednesday, after the vessel had docked at terminal No 5, officials said. The ferry was on its way to Aricha from Rajbari's Daulatdia ghat when it sank at Paturia.