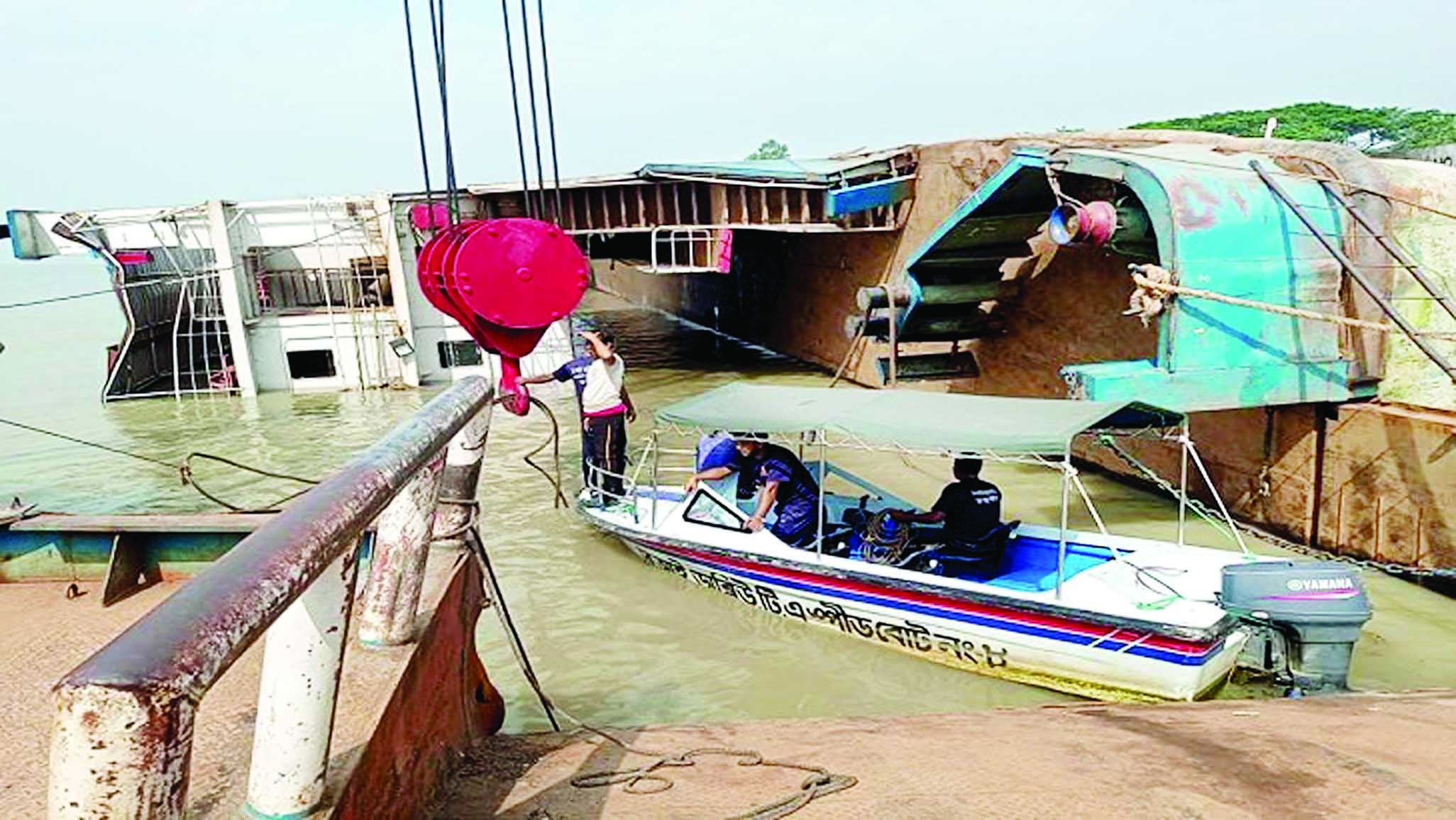 Rescue ship Hamza salvages two sunken trucks from the river but it does not have enough strength to recover Ro-Ro ferry Amanat Shah. This photo was taken on Thursday. NN photo

News Desk :
Rescue efforts are underway for a second day after a Ro-Ro ferry carrying several vehicles capsized in the Padma River upon docking in Manikganj's Paturia, reports bdnews24.com .
The search was suspended on Wednesday night, said Shariful Islam, deputy assistant director of Manikganj Fire Service. Rescue ship Hamza and two units of the Fire Service resumed operations from 9 am on Thursday.
A vessel named Shah Amanat arrived at the Paturia No. 5 terminal from Rajbari's Daulatdia on Wednesday morning. The ferry started tilting when two trucks and passengers disembarked.
There were 17 trucks, a private car and eight motorcycles on the ferry at the time of the accident. Although three vehicles managed to cross over to the port, the rest sank in the river along with the ferry.
Four cargo trucks and five covered vans have been recovered so far, said fire service officer Shariful Islam. "No bodies were found as of 10:30 am."
Shortly after the accident, a drowning truck driver and some others were rescued. No one was immediately reported missing.
A rescue team from Manikganj Fire Service was dispatched to the scene on Wednesday morning. Another team from Ghior Upazila Fire Service later joined them.
Rescue ship Hamza has been tied to Amanat by a rope. But Hamza does not have the capacity to move the 800-tonne ferry.
"A strong rescue ship Pratya is on its way from Chandpur. It is scheduled to arrive in Paturia this afternoon," said Zillur Rahman, deputy general manager (commerce) of Bangladesh Inland Water Transport Corporation Aricha office.
Bangladesh bought Shah Amanat and seven other Ro-Ro ferries from Denmark in 1980. The ferries expired a decade ago, according to BIWTC.
A seven-member probe panel led by Shipping Ministry Additional Secretary Sultan Abdul Hamid was formed to look into the cause of the accident. The committee was asked to report back within seven working days.