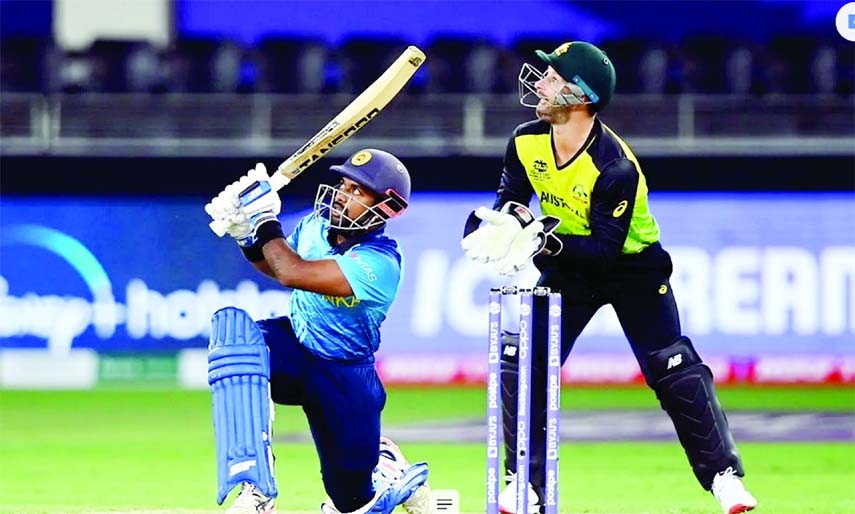 Charith Asalanka (left) of Sri Lanka drives a ball, while wicketkeeper Mathew Wade of Australia looks on during their Group-1 match of the ICC T20 World Cup at Dubai International Stadium in the United Arab Emirates on Thursday.

Sports Reporter :
Australia beat Sri Lanka by seven wickets in their Group-1 match of the ICC T20 World Cup at Dubai International Cricket Stadium in the United Arab Emirates on Thursday.
Sent into bat first, Sri Lanka scored 154 for the loss of six wickets in the allotted 20 overs.
In reply, the Aussies reached the winning spot making 155Â  runs for the loss of three wickets remaining with 18Â  balls.
Australia made a formidable start with two openers David Warner and Aaron Finch contributed together 74 runs in the opening stand before Finch was bowled out by Wanindu Hasaranga de Silva.
Finch hit a remarkable 37. He cracked five fours and two sixes in his 23-ball innings.
One-down Glenn Maxwell (5) was caught at the deep midwicket by Avishka Fernando off Wanindu Hasaranga de Silva when Australia's total was 80 for the loss of two wickets.
Opener David Warner top-scored with 65 runs.
Sri Lanka had a poor start as opener Pathum Nissanka (7) was caught at the deep cover by David Warner off Pat Cummins when Sri Lanka's score was 15.
After Nissanka's dismissal, Kusal Perera and Charith Asalanka repaired the damage adding together 63 runs
Â
in the second wicket stand before Asalanka was caught at the deep backward square leg by Steven Smith off Adam Zampa when the islanders' total was 78 for the loss of two wickets.
Asalanka hit a polished 35. His 27-ball innings was ornamented with four fours and a sixer.
After Asalanka's departure, Kusal Perera could stay at the crease for a short period as he was bowled out Mitchell Starc when Sri Lanka's score was 86 for the loss of three wickets.
Perera hit a sparkle 35. His 25-ball innings was laced with four fours and a six.
Later, Bhanuka Rajapaksa and Dasun Shanaka made a notable partnership. They put on together 40 runs for the sixth wicket partnership before Shanaka (12) was caught behind by wicketkeeper Mathew Wade off Pat Cummins when Sri Lanka's total was 134 for the loss of six wickets.
Rajapaksa remained unbeaten with 33. His 26-ball knock saw four fours and a six. Adam Zampa, Mitchell Starc and Pat Cummins bagged two wickets each for 12, 27 and 34 runs respectively.