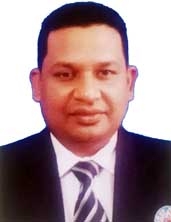 Majhar Mannan :
The human race is on the verge of destruction today due to climate change. Glasgow conference is the last chance to reduce global warming, says the conference chief.Â  The COP 26 conference officially kicked off on Sunday in Glasgow, Scotland, where the world leaders have gathered. British Minister Alok Sharma, who is chairing the conference, said, "If global warming is not brought under control, the whole world will be in a state of catastrophe, just as many countries will be submerged in the sea". He added that steps must be taken now to limit global warming to below 1.5 degrees Celsius by the end of this century.
Earlier in 2015 in Paris, the world leaders agreed to reduce global warming to 2 degrees Celsius, and there was talk of trying to bring it down to 1.5 degrees Celsius. And that's why COP 26 is the last chance.
Leaders from more than 120 countries are attending the conference. A total of 200 countries around the world have been asked to report to the Glasgow Conference on their action plans to reduce carbon emissions by 2030.Â  Bangladesh Prime Minister Sheikh Hasina has also attended the Climate Conference and she has put forward a variety of proposals to world leaders, including the effective implementation of a climate fund to limit global warming.
Excessive emissions of carbon dioxide are causing massive changes in the world's climate and are having a devastating effect on the balance of the environment. According to the International Energy Agency (IEA), carbon dioxide emissions around the world will rise alarmingly this year.Â  A UNICEF report stated that about 20 million children in Bangladesh are at risk due to climate change. Climate change must be tackled to ensure sustainable global development otherwise it will not be resolved. Carbon emissions are largely responsible for climate change, and countries that are leading the way in emitting carbon must be the first to tackle climate change. There are many countries in the world that are not responsible for climate change but they are cruel victims of climate change.
The IEA report says global carbon dioxide emissions will increase by about 5 percent this year. About 3300 crore tons of carbon dioxide emissions could be in 2021. The highest level of carbon dioxide emissions in history was in 2019 but the emission was slightly reduced due to the corona epidemic in 2020, and scientists fear that carbon emissions will increase again in 2021.
China and the United States, two world powers, have agreed to work together to tackle climate change.Â  The two countries have agreed to keep the average annual temperature within 1.5 degrees celsius following the Paris agreement. Carbon dioxide is the main cause of climate change, and China and the United States emit about half of this carbon dioxide. The phenomenon of global climate change is an unequal process. For example, one of the causes of climate change is carbon dioxide emissions, but Bangladesh's contribution to that carbon dioxide emission is only 0.28 percent, but Bangladesh is one of the most affected countries. Scientists predict that about 3 crore people in Bangladesh will be at extreme risk by the year 2050 due to rising sea levels. According to another report, by 2030, more than half a million people in Bangladesh will be at risk of various natural disasters every year due to climate change.
Coal, oil and mineral gas are the main sources of greenhouse gas emissions and people need to use them with extreme caution, otherwise there will be more damage around the world. Currently half of the carbon dioxide we emit is absorbed by land plants and oceans but this process will be weakened if the oceans become warmer and the land dries up. The climate crisis has already begun to hit the low-lying areas, including coral islands.
According to IFRC survey, over four lakh people have died in the last decade due to natural disasters related to weather and climate. Fifty developing countries will have to spend 5000 crore dollars a year to tackle climate change over the next decade. However, the COP26 conference will be a fair solution to the world's climate crisis and the whole world will be considered a healthy habitat for human beings. The problem can only be solved if the largest carbon dioxide producing countries reduce their production of carbon catastrophe.