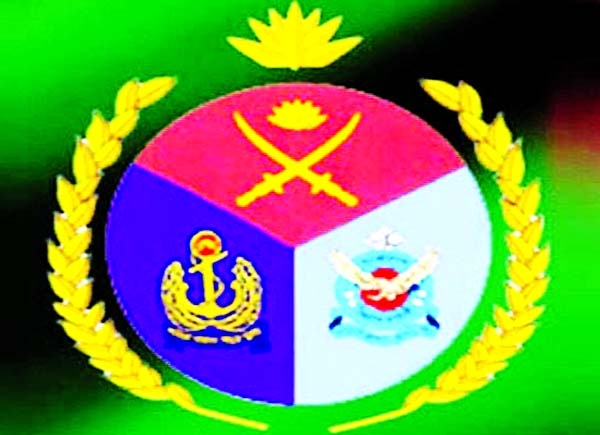 UNB :
Armed Forces Day will be observed across the country on Sunday with due solemnity and enthusiasm.
On this day in 1971, Bangladesh Armed Forces comprising army, navy and air force came into being and launched an all-out attack on the Pakistani occupation forces.
Since the country's independence, the day has
Â been observed as the Armed Forces Day every year.
The day's programmes will start with the offering of special prayers in mosques of all cantonments, naval outposts and establishments and air force outposts after Fajr prayers seeking divine blessings for the country's welfare and progress and continued development and progress of the Armed Forces.
President Abdul Hamid and Prime Minister Sheikh Hasina will place wreaths at 'Shikha Anirban' (the Eternal Flame) at Dhaka Cantonment in the morning to pay homage to members of the Armed Forces who sacrificed their lives in the War of Liberation.
President Abdul Hamid, who is also the supreme commander of the Armed Forces, and Prime Minister Sheikh Hasina issued separate messages on the occasion.
The chiefs of the three services will place wreaths at 'Shikha Anirban' at Dhaka Cantonment in the morning from their respective forces.
Later, the three chiefs will pay courtesy calls on the president at Bangabhaban and the Prime Minister at the Armed Forces Division at Dhaka Cantonment.
On the occasion, the Prime Minister will host a reception and meet the family members of the Bir Shresthas and other gallantry award-winning freedom fighters virtually at Army Multipurpose Complex.
In the afternoon, Sheikh Hasina will also host a reception at 4pm at Sena Kunja in Dhaka Cantonment to commemorate the day.
The chiefs of the Army, Navy and Air Force will also accord receptions to the award-winning freedom fighters of their respective forces and their inheritors.
On the occasion, the speaker of the parliament, the chief justice, former presidents of the country, opposition leader of the parliament, cabinet ministers, state ministers, former chief advisors, election commissioners, journalists, educationalists and other high officials will be present as guests.
Meanwhile, programmes have been chalked out to observe the day at all army garrisons, naval ships and establishments and air force bases throughout the country.
Specially decorated ships of the Navy will remain open at Sadarghat in Dhaka, Chattogram, Khulna, Chandpur and Barishal for visitors from 2pm till sunset.
Bangladesh Television (BTV) was scheduled to broadcast a special programme titled 'Special Anirban' after its 8 pm bulletin on Sunday highlighting the significance of the day.
Bangladesh Betar will broadcast a special ' Special Durbar' programme at 7:30pm on Sunday.
The national dailies will publish special supplements on the occasion.
Besides, online essay and drawing competitions will be arranged in educational institutions under the Armed Forces.