Students vandalise buses for half fare 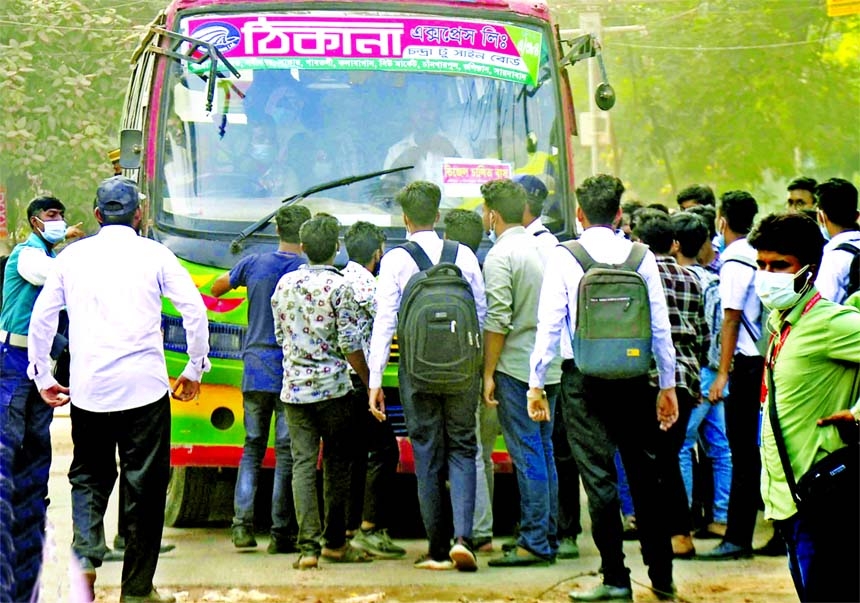 Students vandalise several buses at Dhaka\'s Science Laboratory intersection on Saturday after they were refused to ride paying half of the regular fare.

Staff Reporter :
About 10-12 buses in the Dhaka's Science Laboratory area were vandalised by the students demanding a half-fare bus ride.
Witnessed said, a group of students dressed with Dhaka College, City College and Ideal College started vandalising buses chanting slogans demanding half fare in front of Lab-aid hospital at Science lab intersection around 12:30pm.
They said students have vandalised around 10 buses in the area at a time.
Witnessed and motor workers said that the students started smashing buses while those were going slow due to traffic jam in the area.
"Without understanding anything, a group of college students started attacking on our buses suddenly in the traffic congestion," said Abdur Rahman, a bus driver of Mirpur Metro Service.
He said, coming back after a few minutes, they found their buses wrecked by the students.
Other motor drivers and workers also echoed.
Vehicular movement was stopped some time for the incident on the Mirpur road, witnessed said.
"Chanting slogans, a group of college students brought out a procession in the area at noon and staged demonstrations and attacked buses, said Ekram Ali, Officer-in-Charge of Dhanmondi police station.
He said, the students left the area before arrival of police.
Earlier on Thursday, the Dhaka College students earlier demonstrated in New Market area demanding half fare in buses and gave an ultimatum to the authorities till Saturday to talk to the bus owners and settle the issue.
The students warned of movement on Saturday and Sunday if their demand went unheeded.
Sources said, a college student was thrown by a bus driver following an altercation over bus fare in the city's Rampura area on November 15.
Protesting the incident, a group of students halted 50 buses of 'Raida Paribahan'.
The Bangladesh Road Transport Authority (BRTA) increased the fares for intra-city and inter-district buses by 26.5 pc and 27pc respectively on November 7 following an indefinite strike by the transport owners and workers after hiking fuel price by the government.