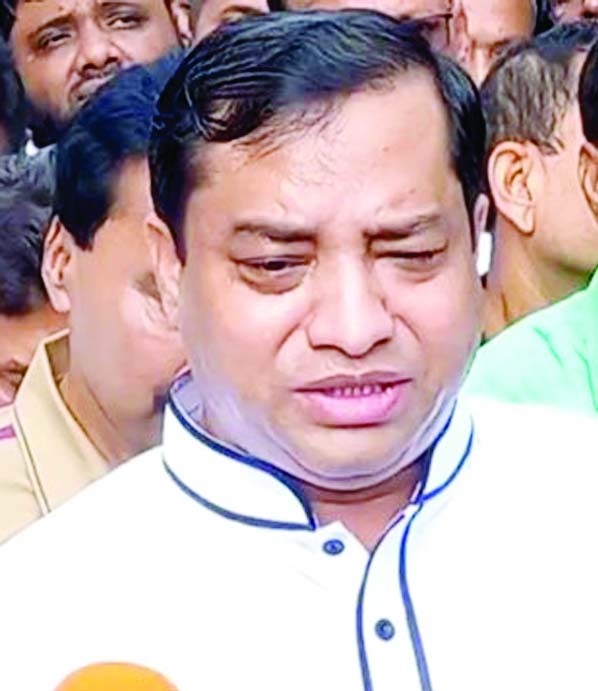 News DeskÂ  :
Jahangir Alam, the Gazipur City Corporation mayor expelled by the Awami League over his remarks on Bangabandhu and Liberation War martyrs, claims he is the victim of a 'conspiracy'.
Jahangir broke down in tears while speaking to the media at his home on Saturday, a day after the party announced its decision. He says he will appeal the decision, reports bdnews24.com.
"Conspirators are trying to give a false impression of me to the honourable prime minister," he said. "If I could speak to the honourable prime minister directly regarding that audio and video, she would understand. Then maybe she would not take the strict action she has."
A man, purportedly the Gazipur mayor, is heard making comments in the audio clip on the three million martyrs and Bangabandhu's role in the war.
Jahangir claimed that the audio that went viral on social media had been doctored and distributed with malicious intent.
"They took my statement and edited the audio and video and made it go viral on the Internet," he said.
Jahangir, a former Chhatra League leader, said there had been a conspiracy against him since his time in student politics.
"Since then, certain quarters and conspirators have not stopped working against me. They have tried to raise questions about me by giving false information to the prime minister."
But, the mayor acknowledges that he may have made a 'mistake' as well.
"The mistake may be mine," he said. "I ask forgiveness for my mistake. Honourable prime minister, please reconsider my decision. I ask the Awami League to reconsider. I want to remain a supporter of the Awami League."
Jahangir became the first mayor of the Gazipur City Corporation in the 2013 election. He ran under the Awami League's boat symbol in 2018 and won another term.
He was also the general secretary of the Gazipur Metropolitan Awami League. He was dismissed from the position during his expulsion. His position as mayor is also in doubt.
"I am mentally unable to bear the blow dealt to myself, my family and my existence by this expulsion," he said. "I may have made a mistake, but I did not sin or commit a crime."
Supporters of the mayor have been demonstrating throughout the city since his expulsion. On Saturday morning, groups of activists from the metropolitan area gathered at his home. Jahangir then emerged in the afternoon to speak to the media.
"As long as I have been aware, I have been with the Bangladesh Chhatra League and the Awami League. The great Bangabandhu and the honourable prime minister have been my ideals in every moment of my existence."
"I am willing to lay down my life for Bangabandhu, the Awami League and the prime minister. But please do not involve me in falsehoods. Let there be no false accusations."
"I have never wanted to be a chief guest at an event during my three years as mayor," he said. "I work on the streets to help the people with the support of the honourable prime minister. And so, I entreat the prime minister, for myself and for the residents of Gazipur."
UNB adds: Gazipur city Mayor Jahangir Alam, who has been expelled from Awami League for his controversial comment on Bangabandhu and other local leaders, said he will submit an application requesting the prime minister to review the decision.
"A rival group has long been involved in doing harm to me since my involvement in student politics and as a sequel to the rivalry some people have hatched conspiracies against me from conversations at home," he said while talking to reporters at his residence on Saturday.
The mayor also offered an apology and requested Prime Minister Sheikh Hasina to rethink her decision.
"I didn't do anything wrong. I'll accept the Prime Minister's decision. If she (PM) wants, I am ready to walk the gallows. Bangabandhu, Sheikh Hasina and Awami League are in my existence and I want to remain as a general member and supporter of the party until death," he said.

On Friday, the ruling Awami League expelled its Gazipur unit general secretary and city mayor Jahangir Alam for life for controversial comments on Bangabandhu and other local leaders.
The decision was made at a meeting of the Awami League Central Working Committee at Ganobhaban chaired by party chief and Prime Minister Sheikh Hasina on Friday evening.