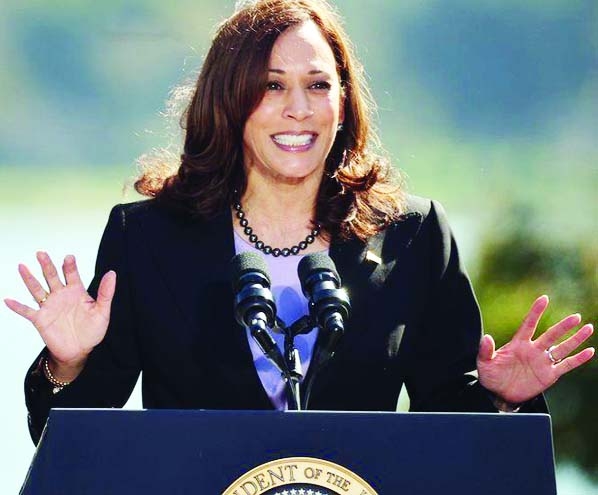 CNN :
President Joe Biden on Friday temporarily transferred power to Vice President Kamala Harris while he was under anesthesia for a routine colonoscopy for one hour and 25 minutes, according to the White House.
The nation's first female, first Black and first South Asian vice president broke yet another barrier when she temporarily stepped into the acting role. Harris worked from her office in the West Wing while Biden was under anesthesia, according to Psaki.
"@POTUS spoke with @VP and @WHCOS at approximately 11:35am this morning. @POTUS was in good spirits and at that time resumed his duties. He will remain at Walter Reed as he completes the rest of his routine physical," Psaki tweeted.
Biden, who turns 79 on Saturday, arrived Friday morning at Walter Reed Medical Center to undergo his first routine annual physical since taking office.
It's routine for a vice president to assume presidential powers while the president undergoes a medical procedure that requires anesthesia. Then-Vice President Dick Cheney did so on multiple occasions when then-President George W. Bush underwent routine colonoscopies.
To officially transfer the presidential powers to Harris, Biden sent a letter to House Speaker Nancy Pelosi and Democratic Sen. Patrick Leahy of Vermont, the president pro tempore of the Senate, at 10:10 a.m. ET before going under anesthesia.
The letter reads: "Today I will undergo a routine medical procedure requiring sedation. In view of present circumstances, I have determined to transfer temporarily the powers and duties of the office of President of the United States to the Vice President during the brief period of the procedure and recovery."
Section 3 of the 25th Amendment to the US Constitution says the President can send a letter to the speaker of the House of Representatives and the president pro tempore of the Senate declaring declaring they are "unable to discharge the powers and duties of his office, and until he transmits to them a written declaration to the contrary, such powers and duties shall be discharged by the Vice President as Acting President."
In order to transfer the powers back to Biden, a separate letter was sent after the procedure.
"In accordance with the provisions of section 3 of the Twenty-Fifth Amendment to the United States Constitution, I hereby transmit to you my written declaration that I am able to discharge the powers and duties of the Office of the President of the United States and that I am resuming those powers and duties," the letter, which was sent to both Pelosi and Leahy, reads.
Earlier this year, former President Donald Trump's ex-press secretary Stephanie Grisham heavily implied that Biden's predecessor underwent a colonoscopy in a secret visit to Walter Reed in 2019, but kept it quiet to avoid transferring presidential power to then-Vice President Mike Pence.