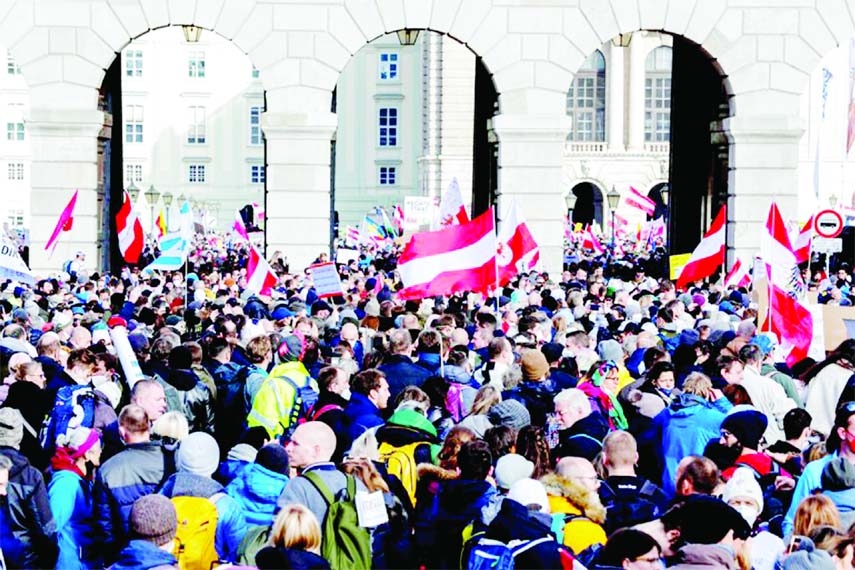 Thousands of protesters gather in Austria\'s capital, Vienna, after the government announced a nationwide lockdown to contain the quickly rising coronavirus infections in the country.

International DeskÂ  :
Thousands of protesters have gathered in Austria's capital, Vienna, after the government announced a nationwide lockdown to contain the quickly rising coronavirus infections in the country.
The far-right opposition Freedom Party is among those who have called for Saturday's protest and have pledged to combat the new restrictions.
Demonstrations against virus measures are also expected in other European countries, including Switzerland, Croatia and Italy, reports Al Jazeera and news agencies.
On Friday night, Dutch police opened fire on protesters and seven people were injured in rioting that erupted in central Rotterdam around a demonstration against COVID-19 restrictions.
The Austrian lockdown will start early on Monday and will initially last for 10 days before being reevaluated. At the most, it will last 20 days. Most stores will close, and cultural events will be cancelled. People will be able to leave their homes only for certain reasons, including buying groceries, going to the doctor or exercising.
The government also said that starting February 1, the country will make vaccinations mandatory.
Vaccinations in Austria have plateaued at one of the lowest rates in Western Europe and hospitals in heavily-hit states have warned that their intensive care units are reaching capacity. Average daily deaths have tripled in recent weeks.
Just less than 66 percent of Austria's 8.9 million people are fully vaccinated, according to government figures.
Austrian Chancellor Alexander Schallenberg apologised to all vaccinated people on Friday night, saying it was not fair they had to suffer under the renewed lockdown restrictions when they had done everything to help contain the virus.
"I'm sorry to take this drastic step," he said on public broadcaster ORF.
Freedom Party leader Herbert Kickl, who announced earlier this week that he had tested positive for COVID-19, referred to the measures as "dictatorship".
Kickl must self-isolate for 14 days, so he will not be able to attend the Vienna protest.
Michael Bonvalot, an Austrian journalist and author, told Al Jazeera the far-right movement - mainly from the Freedom Party - have capitalised on the discontent some have towards the government's COVID regulations.
"What the far right did is that they saw some layer of the population that wasn't entirely happy with the necessary measures against the pandemic," he said, speaking from Vienna.
Bonvalot said the far right is organising around the anti-COVID rules and adding anti-Semitic conspiracy theories to their agenda.
"If we look at the numbers right now, I think there is 20-25 percent of the population which are not entirely happy and are close to some kind of conspiracy theories, and that's who the right-wing extremists are trying to recruit," he said.
In the areas where the right-wing movement is strong, "[fewer] people are vaccinated and more people get ill," he added.