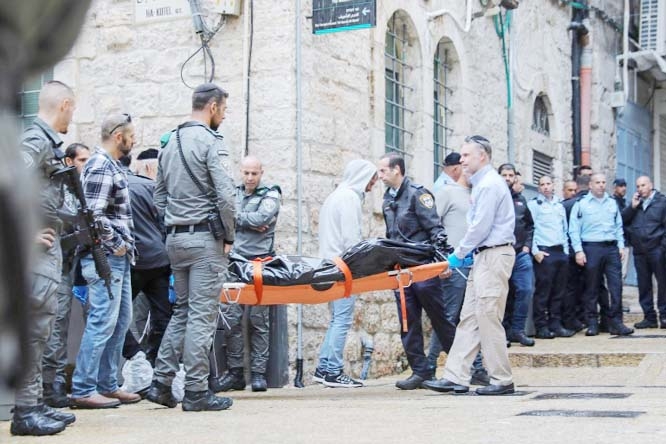 Israeli medics carry the body of a Palestinian man who was fatally shot by Israeli occupation forces after he killed a settler and wounded three others in an armed confrontation in Jerusalem\'s Old City on Sunday.

Al Jazeera :
Israeli occupation forces shot dead a Palestinian man after he carried out a shooting and stabbing attack that killed an Israeli settler and wounded three others, including two police officers.
The armed confrontation began at 9am local time (07:00 GMT) on Sunday morning in the Old City, at the Bab al-Silsila (Chain Gate) to the Al-Aqsa Mosque compound, in occupied East Jerusalem.
According to local reports, the Palestinian man was identified as 42-year-old Fadi Mahmoud Abu Shkheidem, a resident of Jerusalem's Shuafat refugee camp.
Hamas said in a statement Abu Shkheidem was politically affiliated with the Gaza-based armed movement that governs the occupied Gaza Strip.The settler, in his 30s, suffered a head injury and succumbed to his wounds after being transferred to hospital, Israeli media reported.
Another Israeli settler, a 46-year-old, was in stable condition, according to a statement by Hadassah Medical Center. Two police officers, aged 30 and 31, were also lightly wounded. Abu Shkheidem reportedly used a submachine gun and a knife to carry out the attack. Israel's minister of public security said Abu Shkheidem's wife had traveled overseas three days ago.
Dozens of occupation forces began raiding the Shuafat refugee camp, which is closed off on all sides by Israel's separation wall, at about 12:30pm (10:30 GMT), and stormed his home.
Special forces were seen using tear gas in confrontations with youth surrounding the home, and forcibly preventing individuals, including journalists, from filming the raid.
Occupation forces reportedly arrested Abu Shkheidem's daughter, brother and nephew during the rain, and began their withdrawal from Shuafat refugee camp two hours later.
In contravention of international law, Israel occupied and annexed the eastern part of Jerusalem and applied domestic law onto it following the 1967 war. Most of the international community considers East Jerusalem occupied territory and does not recognize Israeli sovereignty claims or illegal settlements there.
According to local media, Abu Shkheidem worked as a teacher at the al-Rashidiya boys' public high school, the oldest and only one serving the Old City's Muslim Quarter, near Bab az-Zahra (Herod's Gate). Occupation forces raided the school following the attack.