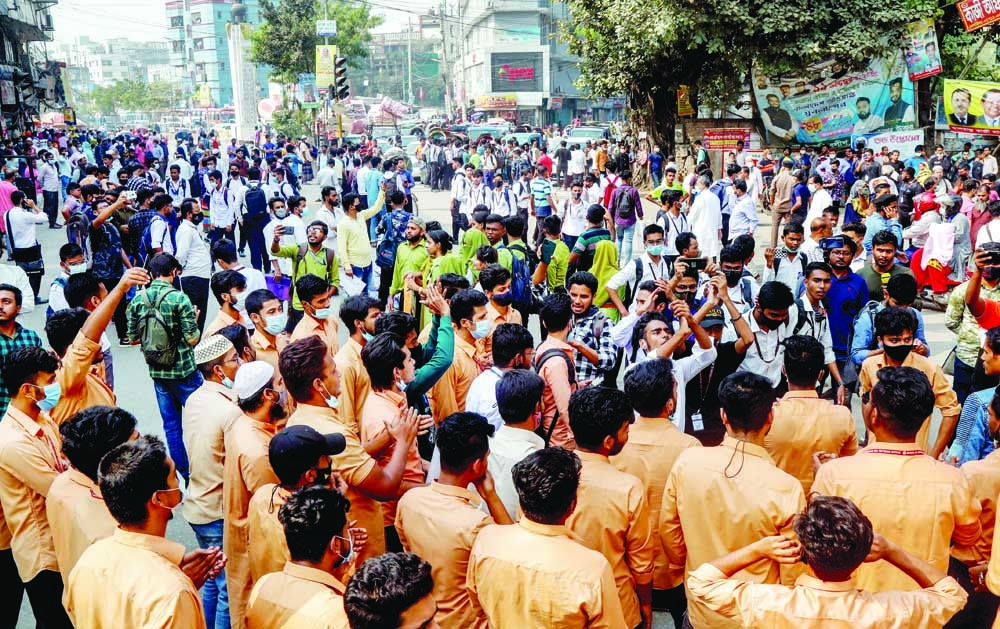 Staff Reporter :
Students from different schools and colleges blocked Mohammadpur bus stand and Science Lab junction in the capital on Monday demanding half fare in buses.
The agitated students blocked the road at Mohammadpur bus stand around 11:15 am yesterday.
Meanwhile, students of Ideal College also blocked the road at the Science Lab junction.
At Mohammadpur, hundreds of agitated students stand in front of Allah Karim Jame Mosque bus stand intersection around 10:30am yesterday and chanted slogans demanding half fare. Traffic on the three-lane road of the bus stand has been closed due to student's movement. As a result, the traffic jam has occurred in the area.
Â However, vehicles of pharmaceutical companies, ambulances and vehicles carrying patients were allowed to move. Police said that they were trying to normalize the situation.
According to the students, many of their classmates who use this bus route every day are being charged full fare. They are also being treated badly for asking half fare.
Earlier, the Passengers Welfare Association of Bangladesh issued a press release saying half bus fare is not just the demand of students and standing passengers, it is their right.
On November 20, the bus owners said that they seek government assistance after students of different institutions vandalised a number of buses in the capital in the morning.
Earlier, students of various institutions in the capital have given a 24-hour ultimatum to the government to accept their half fare demand on public transports and to arrest the bus driver's assistant who threatened a female student of rape on public transport for demanding half fare.
RAB also detained the said bus driver and his helper over the alleged rape threat made to the female student of Begum Badrunnesa College after she offered half bus fare.