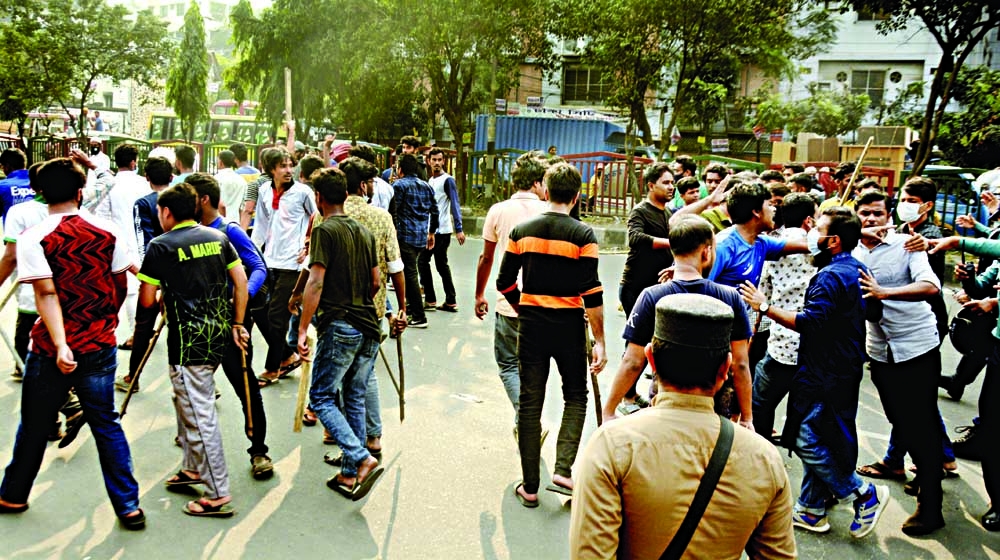 A group of students from Dhaka College attack student protesters during a demonstration demanding that they be allowed to pay half the bus fares at Science Laboratory intersection on Tuesday. NN photo

Staff ReporterÂ  :
The students of Dhaka College, Dhaka City College and Dhanmondi Ideal College were attacked by the supporters of Bangladesh Chhatro League, because they were demanding notification fixing half fare in the public transports.
Witnesses and students who were attacked complained that at the end of the program, the agitating students were preparing to march from the Science Lab to Newmarket and back to the Science Lab. At that time, leaders and activists of Dhaka College Chhatra League attacked the procession alleging vandalism of a motorcycle on the road side.
Students say that after the first attack, when the students gathered at the corner of the science lab, the Chhatro league attacked them again.
All students in school and college uniforms were beaten on the streets during the attack. After the attack, they marched inside Dhaka College chanting 'Joy Bangla, Joy Bangabandhu'
Dhaka Metropolitan Police (DMP) New Market Zone Additional Deputy Commissioner (ADC) Shahen Shah Mahmud told the media saying that chaotic situation arose at the Science Lab intersection over a Dhaka College student's motorcycle vandalism. We have calmed both sides and sent them to their respective colleges. Now the situation is under control, ADC added.
It is learnt that there is no BCL committee in Dhaka College Chhatra League.
In this issue, Central President Al Nahiyan Khan Joy and General Secretary Lekhok Bhattacharya of Chhatra League made several calls on their mobile phones to inquire about the allegations, but couldn't reach them.
Meanwhile, agitated students also gave the government a 48 hours ultimatum to issue a gazette notification for half bus fare.
The demand came from a protest programme at Bakshibazar in the capital around 11am on Tuesday.
They demanded to ensure safe journey for woman and female students.
They also warned that if their demands are not met they will start protest programme at Nilkhet from Thursday morning.
Introducing him as a chief coordinator of 7-college movement, Ismail Samrat, said the half fare should be accepted for the students in all public transports issuing a gazette notification immediately.
Another student named Niloy asked the government to accept their demands, otherwise they will not leave the street.