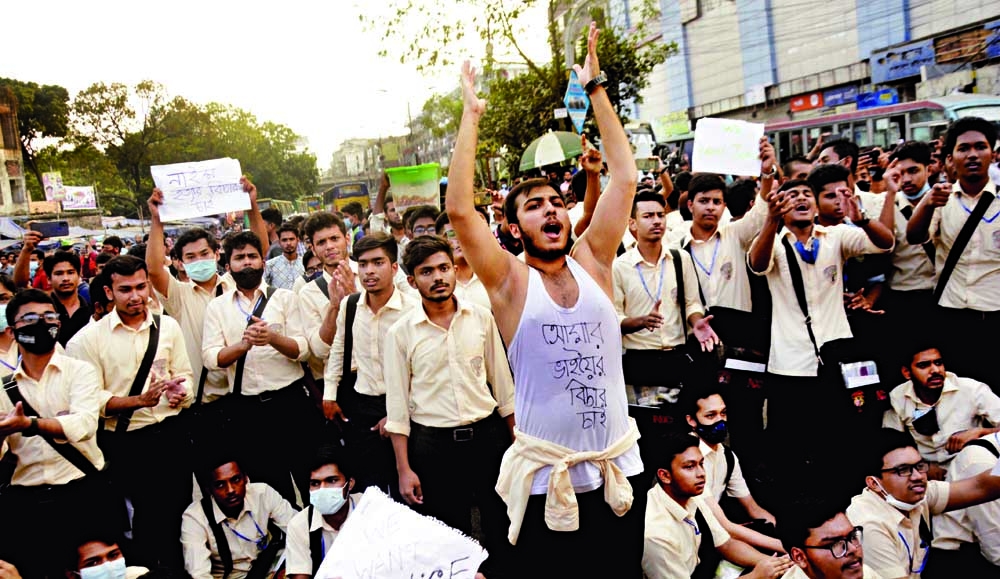 Students of Notre Dame College brought out an angry procession in the city\'s Gulistan area demanding punishment of killer truck driver for the death of their fellow student on Wednesday. NN photo

Staff ReporterÂ  :
Agitated students were protesting by blocking the road against the death of a student of Notre Dame College after being hit by a garbage truck of Dhaka South City Corporation (DSCC). Hundreds of students took part in the protest.
On Wednesday, the protesters blocked Motijheel-Gulistan road from 3 pm. At this time the traffic on the surrounding roads was stopped.Â  They were demanding justice and execution of the guilty.
Paltan police Officer-in-Charge (OC) Salauddin Mia said, "We have arrested the driver named Russell from the spot." The case is being prepared. The car was also seized. Police are also talking to the agitating students to clam the situation.
Earlier, a Notre Dame College student was killed when a city corporation vehicle hit him while crossing the road in the capital's Gulistan on Wednesday. The deceased has been identified asÂ  Nayeem Hasan, 18, son of one Saha Alam.
A pedestrian named Abdullah Al Noman said Nayeem was critically injured after being hit by a city corporation vehicle around 11:30am.
Later, he took him to Dhaka Medical College Hospital (DMCH) where the duty doctor declared him dead around 12:15pm.
Victim body was kept at DMCH morgue for autopsy, said Md Bachchu Miah, In-charge of the DMCH police camp.
Meanwhile, The Dhaka South City Corporation (DSCC) has formed a three-member inquiry committee into the death of Naeem Hasan, a first-year student at Notre Dame College. The committee was formed with Air Commodore Sitwat Naeem as the chief waste management officer and Bipul Chandra Biswas as the general manager (transport) and Anisur Rahman as the supervising engineer (mechanical).
The committee has been asked to submit a written report within the next seven working days.The inquiry committee has been asked to submit a report on how the accident occurred and the culprits were identified and how such accidents could be avoided in the future.