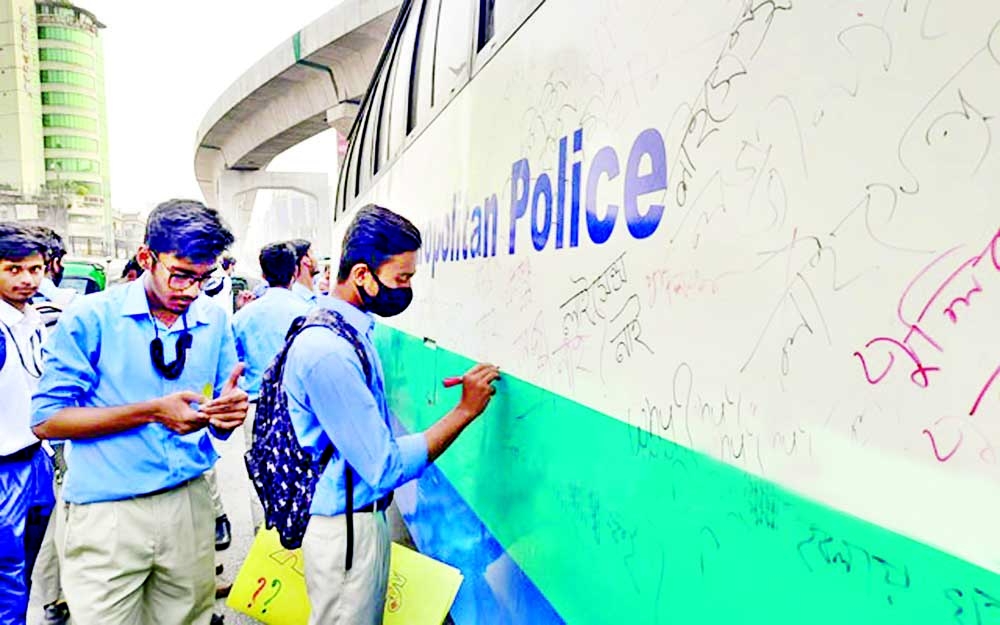 Protesting students write different slogans, including \"why do the police not have a licence?\" on a DMP bus in the capital on Thursday after its driver failed to show licence. NN photo

News Desk :
Students protesting the recent death of a Notre Dame student in a road accident blocked a Dhaka Metropolitan Police bus for an hour after the driver was unable to show his license.
The DMP bus was on its way from Rajarbagh to Mirpur around 1:30 pm on Thursday when the protesting students asked for the driver's licence, reports bdnews24.com.
Driver Lal Mia said his licence was back at his office and that he had asked one of his colleagues to bring it to him.
The students barricaded the bus until 2:30 pm after spraying and writing different protest slogans on it, including one that said - "why do the police not have a licence?".
Students have held demonstrations in Dhaka for several days to demand that they be allowed to avail a half-price discount on bus fare. Amidst the movement, a DSCC garbage truck ran over and killed Notre Dame College student Nayeem Hasan on Wednesday.On Thursday morning, students from different colleges, including Holy Cross College, Residential Model College and Govt Science College, blocked several key roads in the capital to protest the death of their fellow student.
The protesters said they did not want to lose another student due to the carelessness of an unlicensed driver, so they were unwilling to risk letting another driver without a licence drive around on the streets.
Students also claimed that a police constable had "cursed" at them. The accused member of the force, however, later apologised to the protesters.