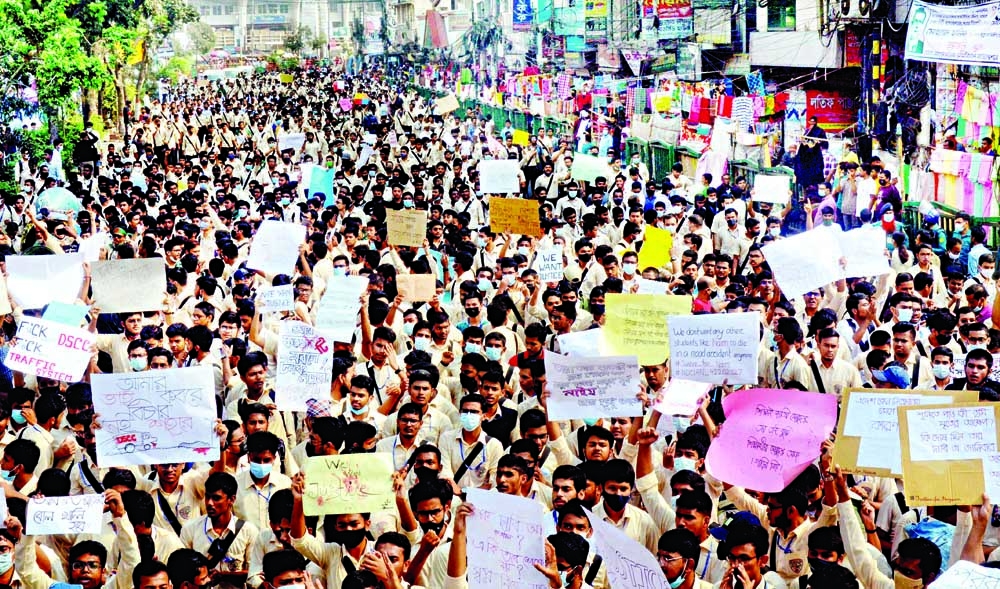 Students block the zero-point intersection in the capital on Thursday demanding justice for the death of Nayeem Hasan, a Notre Dame College student who died after being hit by a Dhaka South City Corporation garbage truck. NN photo

News Desk :
Students of different colleges in Dhaka city staged demonstrations in different parts of the city on Thursday protesting the death of Notre Dame College student Naim Hasan and demanding road safety.
Students of different colleges in Motijheel's Shapla Chattar area, Farmgate, Uttara Azampur, Asadgate, Mirpur, Gulistan, and Bailey Road took to the streets and put up barricades to protest the death of Naim in a tragic road crash on Wednesday.
Vehicular movement in different parts of the city have been suspended due to the demonstrations, creating traffic congestion that caused immense suffering to commuters.
The students of Notre Dame College took position at Shapla Chattar in the city around 11 am, halting vehicular movement, said witnesses.
Later, they brought out a procession with placards towards Gulistan and staged a sit-in there, reports UNB.
Besides, a section of students blocked a portion of Bailey Road, Asadgate, Mirpur and Farmgate areas in the city demanding road safety.
Abu Raihan Md Saleh, joint commissioner (traffic north), said "Traffic congestionsÂ  were seen in different parts of the city including Uttara Azampur, Gulistan, Farmgate andAsadgate as students were staging demonstrations demanding steps to ensure safe road and half bus fare for students."
Earlier, on Wednesday, Naim Hasan, 17, a 2nd-year student of Notre Dame College was killed when a garbage truck of Dhaka South City Corporation (DSCC) hit him at Golchattar in the city's Gulistan area.
Protesting the death of Naim, some students of the college staged demonstrations in front of the Nagar Bhaban.
bdnews24.com adds: The students aggrieved by the death of a peer in a roadÂ  mishap have left the streets after a day of protests that caused traffic turmoil in Dhaka.
But they vowed to resume their demonstrations unless their demands, including justice for the dead student and reduced bus fares, are met.
The protesters said on Thursday afternoon they would be back on the streets at 11 am on Saturday if they did not get assurances from the authorities to meet the demands.