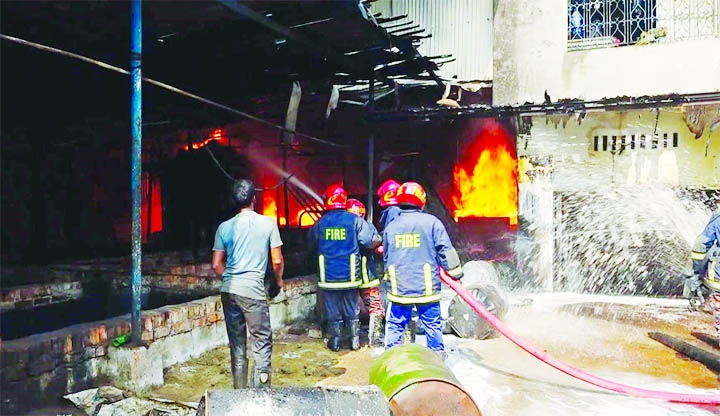 Fire Service officials at work to douse the fire at a chemical factory in the BSCIC Industrial area in Chattogram\'s Sagarika on Friday.

News Desk :
A massive fire broke out at a chemical factory near Zahur Ahmed Chowdhury Stadium in Chattogram on Friday morning.
Fortunately, no casualties were reported.
However, a total of 12 fire tenders pressed into service to douse the flames were yet to contain the blaze till last reports came in.
The fire broke out at Homeland chemical factory near Zahur Ahmed Chowdhury Stadium in Chattogram around 10.30 am. The blaze soon triggered an explosion, according to locals.
By the time, the first fire tender reached the spot, the blaze was already out of control, reports UNB.
Soon, 11 more tenders from various parts of Chattogram chipped in, but were battling to bring it under control, our correspondent reports from Chattogram.
Newton Das, deputy assistant director of the Chattogram fire service, said that "the 12 fire tenders are trying their best to contain the blaze".
"The cause of the fire could not be ascertained yet. But highly inflammable chemicals stockpiled inside are giving us a hard time," he said.
Meanwhile, a firefighter died at Chattogram Medical College Hospital after falling ill while dousing the fire
Â Â  Â
Â that broke out at the chemical factory.
The deceased was identified as Md Milon, 41, a worker of Agrabad Fire Service.
Farid Ahmed, Deputy Director of Chattogram Fire Service, said Milon felt chest pains after extinguishing a fire at a chemical factory. He was then taken to Chattogram Medical College and Hospital (CMCH) where he died around 2pm.