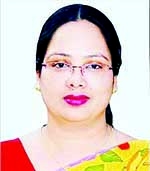 News Desk :
The president has scrapped the punishment of former Kurigram deputy commissioner Ex DC Sultana's Sultana Parveen over the illegal arrest and torture of Ariful Islam, the former district correspondent of Dhaka Tribune.
Following an investigation, the Public Administration Ministry suspended her salary increment for two years on August 10 this year.
In an official circular issued on November 23, the ministry said that her punishment has been scrapped and that she has been relieved of the allegations after she appealed to the president.
Sultana Parveen, who was withdrawn and now attached to the ministry as an officer on special duty (OSD), appealed to the president on September 6, says the notification signed by Senior Secretary KM Ali.
"The honourable president has scrapped the punishment of two-year suspension on salary increment and relieved her of the charges," it reads.
The August 10 circular over Sultana's punishment has been annulled and she has been relieved of the charges, says the latest Public Administration Ministry circular.
Usually, the position of OSD at the Ministry of Public Administration is considered a punishment. Officials transferred to the position are allowed salaries by month-end but not much else.
On March 14 last year, a mobile court of Kurigram district administration, led by the three assistant commissioners, convicted and sentenced Ariful, the Kurigram correspondent of Dhaka Tribune and Bangla Tribune, to a year's imprisonment, after he was arrested from his home, on charges of possession of narcotics.
Earlier the same night, Ariful and his family members were about to go to sleep when some Ansar members, accompanied by Nazim Uddin, Rintu Bikash Chakma and Rahatul Islam, barged into their home and subjected Ariful to beatings and torture. Later at around 1:30am, Ariful was sent to jail.
Following the probe, the ministry also postponed Assistant Commissioner Rahatul Islam's increment for three years and demoted RDC Nazim Uddin.
At the time, the ministry also decided to dismiss Assistant Commissioner and Executive Magistrate Rintu Bikash Chakma from public service.