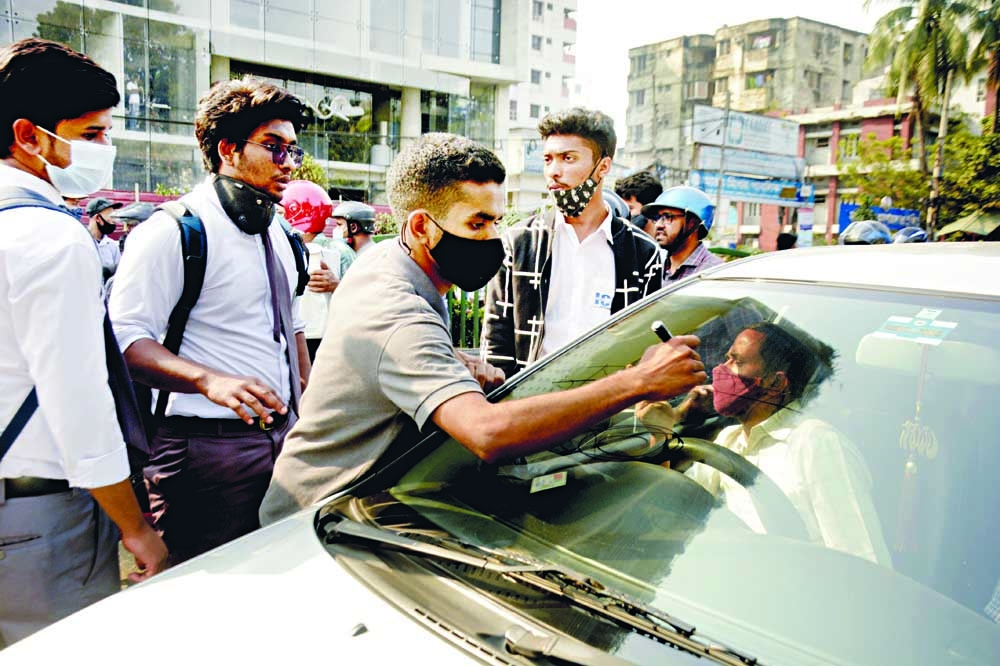 Students check the papers of a car driver during a protest for road safety at Dhanmondi Road 27 in the capital on Saturday. NN photo

News DeskÂ  :
Students calling for a half-price discount on bus rides and protesting the death of Notre Dame College student Nayeem Hasan have presented a nine-point list of demands to ensure road safety and have called on authorities to fulfil them by November 30.
Students blocked roads in the Asadgate, Dhanmondi Road 27 and Uttara House Building areas for a third day of protests on Saturday.
Protesters in the Dhanmondi area read out the nine-point demand before dispersing around 2:30 pm.
A group representing the protesters met with the Bangladesh Road Transport Authority or BRTA on Thursday to present their demand, they said. BRTA officials sought a week to have them approved.
However, the students cut the deadline by two days and announced a demonstration surrounding the BRTA headquarters if an official notice is not issued by then.
The protests and demonstrations will continue in the days leading up to the deadline, they said.
In 2018, students launched an unprecedented movement over road safety and presented a nine-point demand to the government, who promised to implement the changes but never acted upon them, a protester said.
If their demands are not met this time around, fresh demonstrations will be announced, he added. Following a 23 percent increase in diesel prices, the government increased bus fares by 26 percent under pressure from transport owners. Since then, students have been protesting for a half-price discount on bus fare.
The death of Nayeem, who was involved in an accident with a Dhaka South City Corporation bus on Wednesday, added a new dimension to the protests.
The demonstrations paralysed traffic in Dhaka on Thursday and ended with the protesters vowing to return to the streets on Saturday unless their demands, including justice for Nayeem and a concession on bus fares, were met.
Later on Friday, Road Transport and Bridges Minister Obaidul Quader announced that student fares on BRTC buses would be halved from December 1.