13 to die for lynching students in Aminbazar 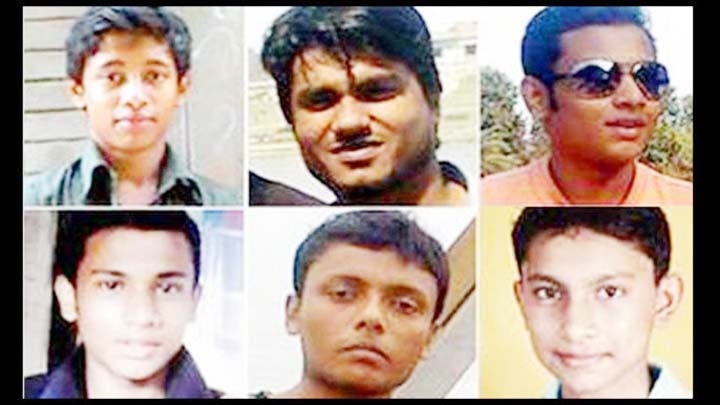 Court Correspondent :
A Dhaka court yesterday sentenced 13 persons to death and 19 others to life imprisonment for killing six students in Aminbazar area of Savar ten years ago.
Second Additional District and Sessions Judge Ismat Jahan of Dhaka delivered the verdict on Thursday.
Earlier on November 22, the court fixed Thursday to deliver the verdict afterÂ  arguments from the both sides ended. The court recorded the depositions of 55 witnesses out of 92.
The death sentences convicts are Abdul Malek, Sayed Member, Abdur Rashid, Ismail Hosain Refu, Nihar alias Jomsher Ali, Mir Hossain, Mojibur Rahman, Anwar Hossain, Rojur Ali Sohag, Alam, Rana and Abdul Hamid Aslam Mia. Every one of them also have been fined Taka 20,000 each. Besides, under Sections 201/34 of the Penal Code they were also fined Tk 10,000 each in default they will have to suffer imprisonment for 6 months more.
The life-term convicts are Shahin Ahmed, Forid Khan, Rajib Husain, Md Wasim, Sattar, Selim, Monir Hossain, Alamgir, Mobarak Hossain, Akhli Khandaker, Bashir, Rubel, Nur Islam, Shahadat Hossain Rubel, Tutul, Masud, Mokles and Saiful.
The court acquitted 25 accused as they were not found guilty.
As during trial, accused Kabir Hosain, Rashed and Parbat died, their namesÂ  were dropped from the case.
Of the 60 murder accused six are on the run, and as two died and they were discharged from the case. Remaining 52 accused were on bail and on November 22, their bail were cancelled and they were sent to the jail.
In the case, 14 accused made confessions under Section 164 of the CrPC.Â Â Â Â Â Â Â Â  Â
The victims are Tipu Sultan of Tejgaon College; Towhidur Rahman Palash, Kamruzzaman Kanto and Ibrahim Khalil of the Mirpur Bangla College; Shams Rahim Shamam of Maple Leaf International School and Sitaf Jabi Munif of Bangladesh University of Business and Technology.
A mob brutally lynched the six youths of Bardeshi village near Aminbazar bridge at night of Shab-e-Barat on July 18, 2011, suspecting them robbers. The killers then filed a robbery case against the deceased with Savar Police Station.
A day after the incident, Savar Police Station Sub-Inspector Md Anowar Hossain filed a murder case against 500-600 unnamed people of the Bardeshi village.
Charge sheet in the case was filed against 60 on January 7,2013, while Dhaka's Second Additional District and Sessions Judge Md Helal Uddin on July 8,2013, framed charges against them.