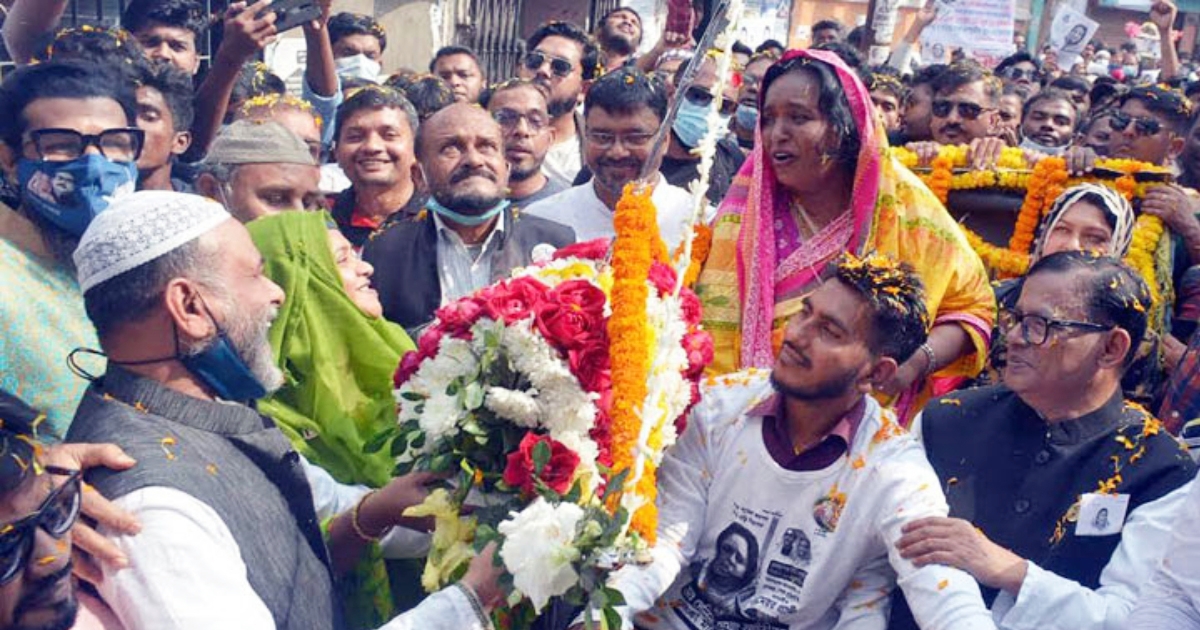 All curious eyes are on the Dundee of Bangladesh â Narayanganj â now, with the city polls just one day away.

Narayanganj city will go to the polls for the third time Sunday. However, no electioneering will be allowed after Friday midnight.

On the two previous occasions, it was held â since Narayanganj became a city for administrative purposes â the election captured the imagination of the entire country â particularly the first time in 2011.

It was very much the arrival on the scene of Dr Selina Hayat Ivy. The original "rebel candidate," she took on and defeated the Awami League's heavyweight in the area, Shamim Osman, by over 100,000 votes. That was the start of her enduring rivalry with Shamim â the two torchbearers of two very different strands of the Awami League in Narayanganj.

In 2016, Ivy won again â this time as the Awami League candidate. Shamim by then had become a member of parliament in 2014. He did look to deprive Ivy of the Awami League nomination, but the party's central command defied the recommendation of its Narayanganj unit â with which Shamim held great influence â to back the popular incumbent.

This time, politicians and their supporters are carrying out activities in 27 wards of Narayanganj City Corporation. Councillor candidates can be seen campaigning hard to win the polls.

Although seven candidates for running for the post of Narayanganj City Corporation (NCC) mayor, ruling party nominee Ivy and her principal rival â Advocate TaimurAlamKhandaker, a veteran BNP leader who is fighting as an independent candidate (the BNP is boycotting polls under the current Election Commission) â have stolen all the attention.

Supporters of both candidates have made electioneering neck and neck. Also, things have hotted up as the two major mayor hopefuls have accused each other of ruining the election atmosphere.

Also, despite not being among the seven names on the ballot for mayor, what Shamim Osman does and which way he swings has been at the centre of discussions surrounding the election once again. He never seems to be out of the picture.

Although his equation with Ivy is possibly irredeemable â as anyone who has seen their open warfare on the set of a private television channel can understand â questions were being raised as to whether his drive to put one over Ivy was making him even neglect his duty towards his party by not campaigning for the candidate.

This week Ivy threw a spanner in the works by alleging the man being viewed as Taimur is actually the candidate of the Osman brothers, Shamim and Bangladesh Knitwear Manufacturers and Exporters Association President Selim Osman.

Following his announcement, most of the Awami League leaders, activists in Narayanganj were seen in full campaign mode for Ivy, who has served as mayor since 2011.

"The game will be on and we will win it on January 16," Shamim said Monday.

However, Ivy said on the same day that "it has become clear from Taimur's activities that he is the candidate nominated by Shamim Osman."

This was the same claim she made earlier, that ruffled feathers in the Awami League high command and forced Shamim Osman to come out and clarify his stance ahead of the election.

Thursday, regarding Shamim Osman's support, Ivy said: "I did not say I will not need his support. The party has nominated me and the partisans and voters will cast votes for me. If one or two votes do not get cast it will not matter."

Taimur said, "My opponent is assuming I got support from certain people and is trying to damage my reputation."

"Also, my supporters, party activists, and leaders are being threatened through police visits to their homes."

Taimur's coordinator and campaign in-charge, also the convener of district BNP Monirul Islam Robi, was arrested by police from his residence in Hirajhil.

Going for a hattrick

Despite the presence of the six other candidates on the ballot, there can be no doubt that Ivy is the overwhelming favourite to complete her hattrick as the NCC mayor. She is campaigning from dawn to dusk, and it seems wherever she goes, she is being showered in love by her supporters, who tend to come out in full force. By now she is used to waving back with her pleasant smile to acknowledge their support.

At a time when the electoral mechanism of the country has been going through a crisis, Ivy has emerged as a true people's representative, having passed the test of both popularity and principle through the hard-earned votes of the public.

She only gets upset when that one name comes up.

"I do not want to talk about Shamim Osman," she burst out at reporters Thursday. "Why keep dragging his name in? He is nouka's man, where else will he go?"

The candidates' qualifications, popularity, party symbol, gender, age could be the deciding factors this year. Women and youth voters are expected to play a pivotal role. However, whoever wants to win the election must bag a major chunk of the first-timers, according to popular perceptions.

Taimur, during the campaign, repeatedly asked his leaders and workers to maintain distance by following the health rules. He also increased his complaints about the administration not letting him and his workers campaign freely, with increased police visits to their houses.

Ivy said, "If the situation gets bad, the administration is there to tackle it. Problems can arise in the build-up to the polls. Three elections took place here before. Tensions ran high during those times as well. But everyone went to vote."

Regarding the arrests of Taimur's activists and election agents, she said, "I am busy all day. I am not involved in any violence. I never told anyone to arrest someone."

In the end, the only thing that may count against Ivy is that the once-rebel has by now become very much part of the establishment, as her comment on the law and order situation above reflects.

The Awami League's famed electoral symbol, nouka, has taken a real beating in the recent union parishad elections, where by the fifth phase independent "rebel" candidates were winning big, and winning more of the chairman posts up for grabs, despite scores of the League chairmen being elected unopposed.

During electioneering Thursday, Taimur said: "Police activities have made the election environment tense. However, people are not afraid. The elephant (his electoral symbol) is now the symbol of the people. Through elephant, change will come."

On the other hand, although Shamim announced that he would work for the boat, the people's doubts about him are not going away. Ivy herself still cannot take his promise seriously. Generally, it is felt that as long as the Osman family is on board and active in the field for Ivy, her victory is assured.

But Shamim's press conference this week failed to convince too many people. There is still a feeling for some reason that the Osman family is with TaimurAlamKhandaker because they can never be with Ivy.

The Election Commission (EC) is "depriving voters of their rights" by not disclosing wealth information of candidates, ShushashonerJonnoNagorik (Shujan) said ahead of the elections.

Wealth disclosure helps a voter make an informed choice when electing candidates. "But the EC is depriving voters," he said.

"How is it possible? This information helps voters to choose the right candidate," he said.

According to Shujan, seven are vying in the mayoral race, while 148 for councillor posts and 34 in reserved seats.

Of them, 120 candidates have either passed SSC or failed to complete school education. Of the seven mayoral candidates, two are businessmen, one lawyer, one physician and two are service holders. One candidate did not disclose his occupation.