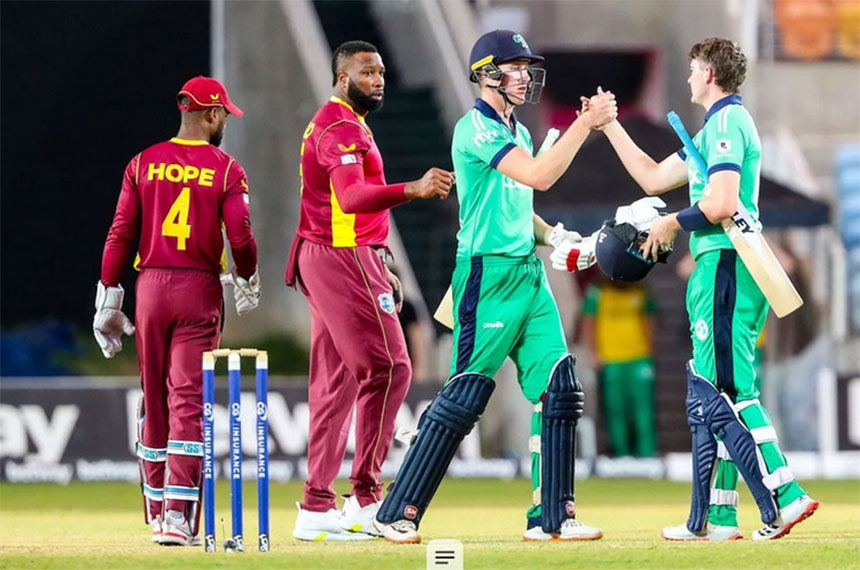 Harry Tector and Gareth Delany of Ireland celebrate after Ireland\'s win against West Indies in the 2nd ODI at Kingston on Thursday.

AFP, KingstonÂ  :
Harry Tector's unbeaten 54 helped Ireland to a five-wicket win over the West Indies in a rain-affected second One Day International (ODI) in Kingston on Thursday to set up a series decider this weekend.
Victory saw Ireland square the three-match contest at 1-1 ahead of the teams' return for a now decisive finale at Sabina Park on Sunday.
Ireland, set a revised target of 168 from 36 overs under the Duckworth-Lewis-Stern method after a rain delay of more than an hour, finished on 168-5 with 20 balls to spare.
They had been chasing 230 at the start of their innings and were well-placed at 158-4 when play was halted midway through the 32nd over.
By that stage, Tector had already completed his second fifty of the series following the 53 he made during a 24-run defeat in the first ODI, with the 22-year-old hitting four fours and a six.
George Dockrell fell after the resumption but by then Ireland were just three runs shy of victory.