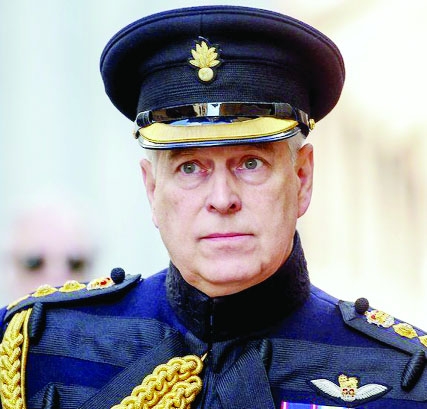 News DeskÂ  :
Britain's Royal Family has stripped Prince Andrew of his military roles and royal patronages and said he will no longer be known as "His Royal Highness", as the second son of the Queen fights a lawsuit in the United States in which he is accused of sexual abuse.
The 61-year-old Duke of York was forced to step down from public duties in 2019 because of his connections to convicted US sex offender Jeffrey Epstein, and after a disastrous interview on the BBC's flagship current affairs programme, which he had hoped would clear his name, reports Al Jazeera.
"With The Queen's approval and agreement, The Duke of York's military affiliations and Royal patronages have been returned to The Queen," a Buckingham Palace statement said on Thursday.
"The Duke of York will continue not to undertake any public duties and is defending this case as a private citizen."
The move strips the prince of all royal connections and comes after the prince's lawyers failed to persuade a US judge to dismiss a civil lawsuit against him in which Virginia Giuffre accuses him of sexual abuse when she was 17.
US District Judge Lewis Kaplan said Giuffre, who is now 38, could pursue claims that Andrew battered her and intentionally caused her emotional distress while Epstein - a financier who killed himself in jail in August 2019 just before he was due to stand trial on sex trafficking charges - was trafficking her.
The prince has denied Giuffre's accusations that he forced her to have sex more than two decades ago at a London home of Epstein's former partner and associate Ghislaine Maxwell, and abused her at two Epstein properties.
In the BBC interview, he denied ever having sex with Giuffre, but conceded his continued association with Epstein - even after he was convicted of soliciting prostitution - had let the royal family down.
Andrew described Maxwell, who was convicted of sex trafficking and abuse by a court in New York this month, as a friend.
'Disrepute'
The removal of Andrew's military roles came after more than 150 Royal Navy, Royal Air Force and British Army veterans wrote to the queen.
The 95-year-old head of state is the commander-in-chief of the army, navy and air force.
"Were this any other senior military officer it is inconceivable that he would still be in post," the veterans wrote in a joint letter made public by the anti-monarchy pressure group Republic.
"Officers of the British armed forces must adhere to the very highest standards of probity, honesty and honourable conduct.
"These are standards which Prince Andrew has fallen well short of," they wrote, adding that he had "brought the services he is associated with into disrepute".
Al Jazeera's Jonah Hull, reporting from London, said Andrew had become toxic to the monarchy.
"He has potentially [also] become toxic to the queen. He is her favourite son, her second son.
"This is a year of huge importance to her [as it marks her platinum jubilee celebration, 70 years on the throne], and clearly, he is now deeper-than-ever embroiled in sexual assault allegations that he would have hoped until very recently could have been potentially put to one side," Hull added.
The judge's decision in the US means Andrew could be forced to give evidence at a trial which could begin between September and December 2022 unless a settlement is reached.
"Given the robustness with which Judge Kaplan greeted our arguments, we are unsurprised by the ruling," a source close to Andrew told Reuters news agency.
"However, it was not a judgement on the merits of Ms Giuffre's allegations. This is a marathon not a sprint and the Duke will continue to defend himself against these claims."
Senior members of the British royal family have typically been appointed as honorary heads of military units, with the queen's approval.
Andrew was honorary colonel of the Grenadier Guards, whose soldiers guard Buckingham Palace in their distinctive bearskin hats and red tunics.
Royal patronages are associations with charities and other organisations.