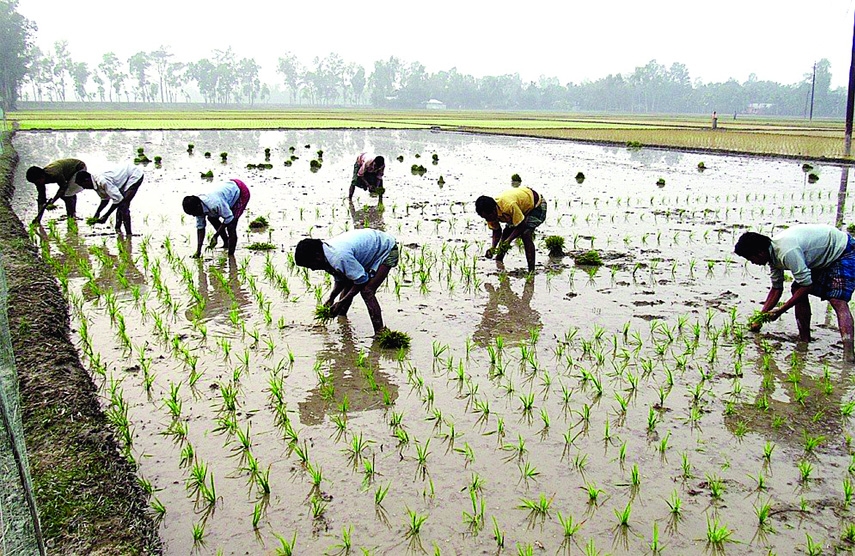 Netrakona CorrespondentÂ  :
Farmers are passing their busy times for transplantation of Boro Paddy seedlings on their prepared lands in all the ten upazilas ofÂ  Netrakona during the current month of January.
Department of Agriculture Extension (DAE) in Netrakona office sources here said the Boro cultivators have transplanted the Boro Paddy seedlings on 60,000 hectors of land in the district.
The DAE has designed a plan to produce 7,70,702 metric tons of clean Boro Paddy from 1,84,575 hectors of land in the district during the current Rabi season.
Following the plan, the Boro cultivators will produce 1,69,812 tonnes of hybrid variety of BoroÂ  Paddy from 34,588 hectors of land of the district, 6,00377 tonnes of high yielding variety (HYV) of Boro rice from 1,49, 720 hectors of land and 513 tonnes of local variety of Boro rice from 270 hectors of land.
By this time, the government has provided agricultural incentives to small and marginal farmers of the district to make them capable to run Boro cultivation without facing any problem.
Talking to BSS correspondent, Deputy Director (DD) of DAE Netrakona FM Mubarak Ali said, under the agriculture incentive giving program, the government has already distributed 180 tonnes of improved variety Boro seeds , 200 tonnes of MOP and 200 tonnes of DAP fertilizer among the 60,000 small and marginal farmers of the district.
Apart from this, the government has ensured proper supply of improved quality Boro seeds, fertilizers and other irrigation and agricultural equipment to the door-steps of the Boro cultivators through different state-run agencies including BADC and BCIC to help them, he said.
"The government has also been ensuring un-interrupted supply of electricity through power development board (PDB) and rural electrification board (REB) to keep the irrigation machineries including deep tube wells and shallow tube wells of the farmers operative round the clock", he informed.
Following directives of the government, different state-run commercial banks including Bangladesh Krishi Bank are disbursing Boro crops loan among the Boro cultivators to assist them for running their Boro cultivation network without facing financial crisis, the DD said.
The crops specialists and field-level officials of the DAE are rendering their field-level service to let the farmers know about the modern methods of Boro crops cultivation through using latest technologies and reducing production costs, the Deputy Director added.
BSS from Gaibandha adds: Farmers have begun cultivation of high valued crop Boro Paddy in all the seven upazilas of the district during the current season amid much enthusiasm.
Department of Agricultural Extension (DAE) has set a target of bringing a total of 1, 30,200 hectares of land under the Boro cultivation this year with the production target of 5,35,000 metric tons of clean rice.
The farmers have already prepared seed beds on 7500 hectares of low land as the seedlings have grown well.
Though the green seedlings are being affected due to chilly wind and dense fog sweeping across the northern region including Gaibandha district, the DAE took precautionary measures to protect the seedlings from cold injuries.
Different banks including Rajshahi Krishi Unnayan Bank have taken up plans to disburse agri loans to the growers on easy term during the season to facilitate the cultivation, officials said.
To fulfill the cultivation target, necessary measures had been taken to supply fertilizers, insecticides, and other agri inputs to the farmers at fair prices with ensuring power supply facility by Northern Electric Supply Company and Rural Electrification Board, said an official of DAE.
Bangladesh Barind Development Authority has also made their 460 electricity run deep tube wells and 45 low lift pumps fully operative to help supply water as irrigation to the farmers at reasonable prices, said executive engineer Azadul Islam.