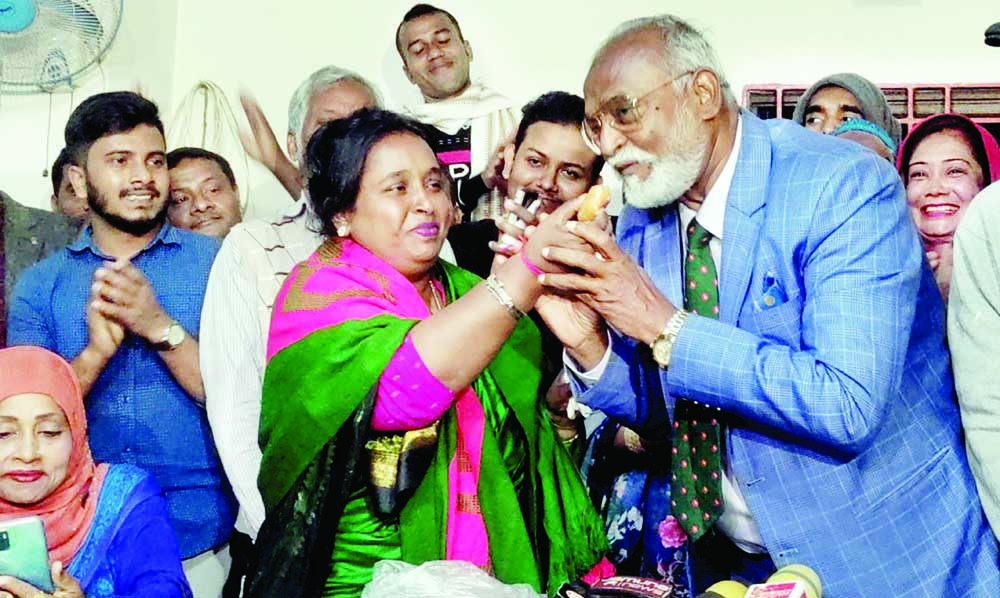 Staff ReporterÂ  :
Dr Selina Hayat Ivy has met Advocate Taimur Alam Khandaker at his home on Monday, a day after winning the mayoral election of Narayanganj City Corporation for the third consecutive term.
Taimur and his family greeted mayor-elect Ivy after she arrived at his house in the city's Masdair with flowers and sweets at the afternoon.
The two leaders later spoke to journalists and also fed sweets each other.
Taimur Alam Khandaker said, Ivy's father Ali Ahmed Chunka was my political idol. For long time we had been maintaining family relations. Ivy's father was used to call my mother as his mother and he was like my elder brother.Â  I forgot what happened in election. In future we will work together.
He added, "I will always stand beside Ivy. I have a cordial relation with her where election is nothing. Election has ended but relations still remain and will have."
Taimur Alam Khandaker urged all residents in the city to cooperate with Ivy.
At that time mayor-elect Dr Salina Hayat Ivy said we had been family relations with Taimur Alam uncle. He has expressed his blessing to me. I will work in future by taking advice from 'kaka' (uncle).
Ivy said: "I never think Taimur uncle is out of our family. For that I came with sweet and flower to meet and take his blessing.
Before and after being elected mayor, she said that if she would be elected as the mayor, she would go to her uncle Taimur's house with sweets.
Ivy secured a third consecutive victory on Sunday's elections, breaking all the previous records of the country's city corporation polls. According to the Election Commission data, Ivy bagged 1,59,097 votes with 'boat' symbol while her main rival Independent candidate Advocate Taimur Alam Khandaker got 92,166 votes with 'elephant' symbol.