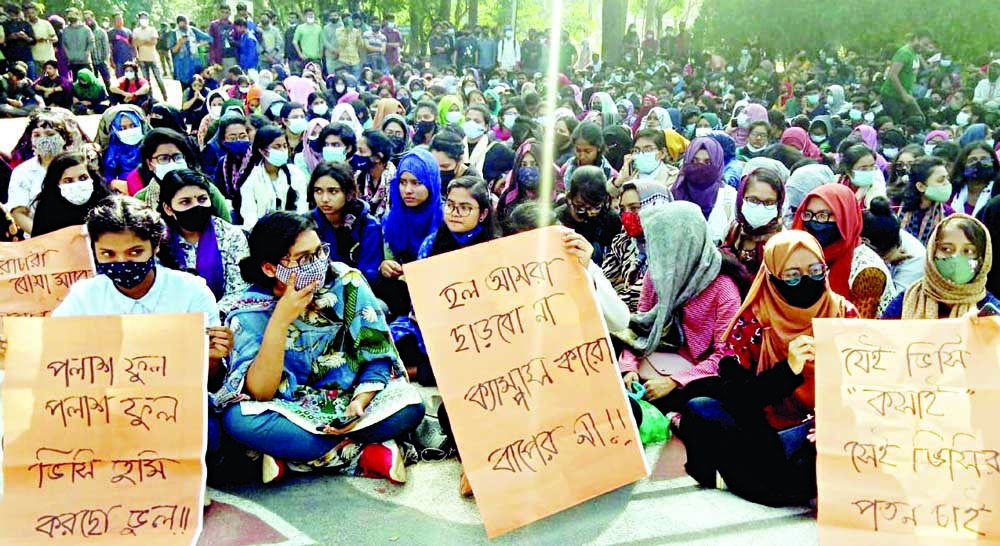 Sylhet Bureau :
Police have filed a case against around 300 unidentified students of Shahjalal University of Science and Technology (SUST) on charges obstructing police from performing their duties and attacking on them.
Sub Inspector (SI) Md Abdul Mannan filed the case with the Jalalabad police station on Monday midnight Â
"A case has been registered over Monday's incident on SUST campus. As many as 200-300 students have been made accused in the case. However, no one was named and no arrests have been made so far," said Jalalabad police station's Inspector (Investigation) Md Abu Khaled Mamun confirming the news.
According to the case statement, the SUST students were staging demonstrations on Sunday to press home their three-point demand, including the resignation of Jafrin Ahmed, provost of Begum Sirajunnesa Chowdhury, and confined VC Farid Uddin Ahmed to a room.
The students reportedly obstructed police from performing their duties around 5.30pm when they went there to rescue the VC. Around 200 to 300 studentsÂ  suddenly attacked the policemen and tried to snatch the firearms of police. They threw brickbats at the police and exploded cocktails, creating panic on the campus, according to the case statement.
Later, police opened fire and exploded 21 sound grenades to bring the situation under control, it said.
Meanwhile, the students continued their demonstrations for the 6th day demanding the VC's resignation and protesting the police action on them, reports UNB.
They gathered at Golchattar point of the campus Tuesday noon rejecting the notice of shutting down the university for an indefinite period and leaving the halls.
They will continue their protests until the VC resigns, said one of the protesting students.
They also collected mass signatures in this regard and wrote an open letter to president Abdul Hamid demanding the VC's immediate removal.
This letter along with the collected signatures of the students will be emailed to the president on Tuesday.
"We'll wait for the president's decision, but our protest will continue till then," said Samiul Hasan Shafin, a protesting student.
In their letter, the students alleged that the police charged batons and even fired rubber bullets to disperse the protesting students from near the IICT building on Monday at the behest of the university authorities.
As many as 40 students were injured in the police action, the letter said.
"It is an unprecedented that the students were assaulted by the police at the behest of the university administration, which is against the Constitution. Besides, the students don't feel safe on the campus under the jurisdiction of the VC," it said.
They also urged the President to order the withdrawal of the additional police force from the campus. Besides, the students of SUST declared the VC as 'persona no grata' on the university campus.
In their letter, the students also demanded the direct intervention of the President and installation of "an honest VC" immediately after ensuring the resignation of the incumbent VC.