Covid-19 norms go for a toss as commuters cram trains 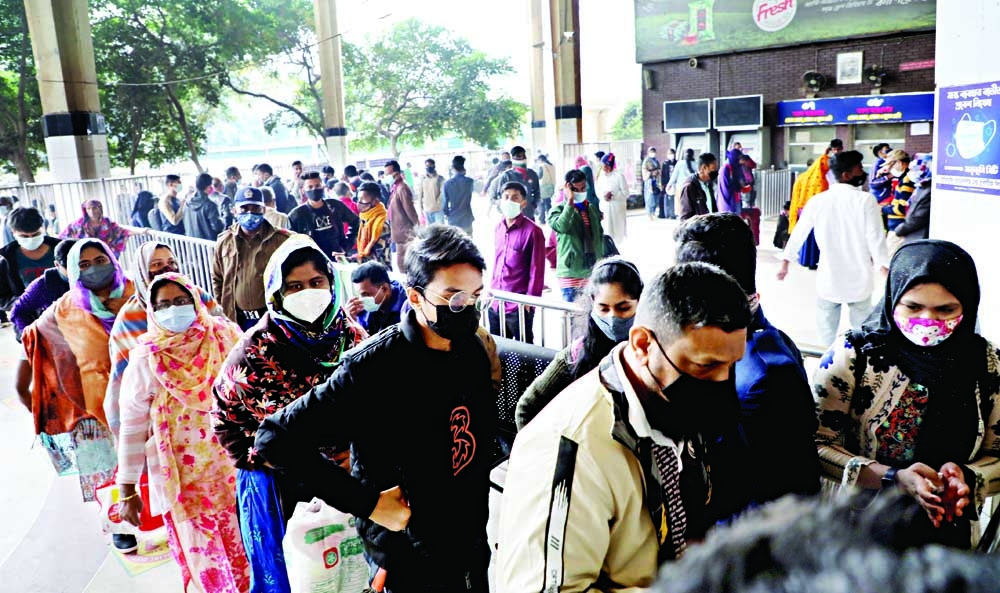 Train passengers stand in a queue in front of a ticket counter of the capital\'s Kamalapur Railway Station on Sunday without maintaining social distancing protocol despite coronavirus surge in the country. NN photo

Reza Mahmud :
Despite the government guidelines to follow certain safety norms during ongoing restrictions to curb the Covid-19 pandemic, the passengers are not following the rules while traveling by trains.
Most of the trains are found overcrowded with passengers violating the government's directives of keeping 50pc seats empty.
As per the government notification the trains will run keeping 30pc of its passenger seats blank since January 15 for maintaining hygienic atmosphere in order to contain the recent surge of covid spreading.
The notification also said that 30pc of the tickets would be sold from rail station's counters and the rests through online.
But passengers commuting the trains regularly have expressed their bitter experiences saying that no seat were kept blank in trains at all.
"Not only carrying passengers in full capacity on the trains, huge crowds of extra passengers we have witnessed in the way from Dhaka to Mymensingh intercity train," Baker Abdullah, a resident of Dhaka told The New Nation after visitingÂ  Mymensingh by train on Sunday.
Â He said that the main crowd started after leaving Kamalapur Railway Station.
"Huge number of passengers were loaded from every station unabatedly except Kamalapur Station.Â  But no one checked the extra passengers for the sake of curbing risks of covid spreading," Abdullah said.
Other passengers also echoed the similar bitter experiences over breaching hygienic measures in trains travelling in every section.
The norms like social distancing and wearing face masks are being flouted openly. But Railway officials and General Railway Police were seen reluctant to enforce these safety norms.
However, passengers in queues were seen without face masks and standing in close proximity to other passengers, not keeping the mandatory distance between themselves. Thus, they are courting risks.
A Railway official, on duty inside a train, said, "When passengers are asked to keep wearing face masks, they say that they have taken it off to get some relief."
Â "Safety protocols and guidelines have gone for a toss inside trains as passengers continue to violate two prime guards against the viral infection - masks and social distancing," said a commuter yesterday.
He added that passengers are found boarding in trains without wearing face masks largely. Additionally, no security personnel have been spotted asking people to maintain social distancing.
Sources said, about two lakh passengers are travelling by railways in around its 3000 kilometer lines every day.
About 140 intercity and mail trains run between Dhaka and rest of Bangladesh every day.
Public health experts appeared anxious seeing mammoth people to violate health safety measures, the risks of covid infection would increase seriously. Â
When contacted, Professor Dr. M. Muzaherul Huq, former Advisor of the World Health Organisation told The New Nation on Sunday, "Its a concern that train passengers are ignoring largely the health advices to put masks and other safety measures. The railway authority must have strict monitoring so that the passengers abide by rules."
The Professor said, "As we know Omicron variant of Coronavirus spreads faster, it might find train compartments and its passengers a convenient place in a confined space to spread hazardously."
Authority must be very strict checking the vaccination status with wearing proper masks in an appropriate way during their travel, he added.
Professor Huq said, railway administration must be strict and take actions against the passengers who are not enduring by the health protection measures.
Meanwhile, Sardar Shahadat Ali, Additional Director General (Operations) of Bangladesh Railway could not be reached while tried to contact to get his comments in this regard.