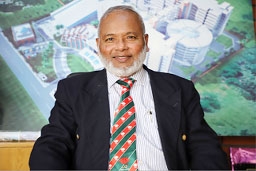 Campus Report :
Prof Dr Shah Jahan Khan has been appointed as the new Vice-Chancellor of Asian University of Bangladesh by honorable president of the People's Republic of Bangladesh.
The newly appointed Vice- Chancellor was given floral greetings by the founder and founder Vice-Chancellor Prof Dr Abul Hasan M. Sadeq. Chairman of board of trustees, Dr Jafar Sadeq, Treasurer, Dr Nurul Islam, and the members of trustees and syndicates were present among others.
Prof Dr Shah Jahan was awarded PhD from university of Western Ontario, Canada, in 1992. He studied Statistics at Jahangirnagar University. He secured first class in both B.Sc (honors) and M.Sc in Statistics.
He started his career in 1980 as a lecturer of Statistics at Dhaka University. He was promoted to the position of Assistant Prof. He received commonwealth scholarship and went abroad for higher studies.
Prof Dr Shah Jahan Khan worked at university of Southern Queensland and King Fahad University of Petroleum and Mineral as associate Prof. He is the former Prof at the department of statistics, Southern Queensland, Australia. Besides, he taught at Sultan Kabus University, Oman and University of Bahrain, Bahrain.
Prof Dr Shah Jahan Khan is the founder editor of journal of Applied Probability and Statistics since 2005. He is an elected foreign fellow of Bangladesh Academy of science; fellow of Royal Statistics Society, UK; Elected member of International Statistical Institute, Netherlands; and member of Mathematical Statistical Institute.
He was awarded Kazi Motahar Hussain Gold Medal by Bangladesh Statistical Institute. He was the only man who was nominated four times for this award in 1997.Â  He was awarded Queensland cultural diversity Award (2014) and Queensland Police Service Award (2016). He is a visiting Prof of Tokyo University, Singapore National University, Carlton University, Canada; Kolkata University, India; Malay University; Daffodil University, Bangladesh; Karachi University, Pakistan; Â
He worked and lived in more than 10 different countries of North America, Europe, and Middle East. He was born in 1953. He belongs to an aristocratic family from Gopalgong district.Â Â