Pahela Baishakh through the years 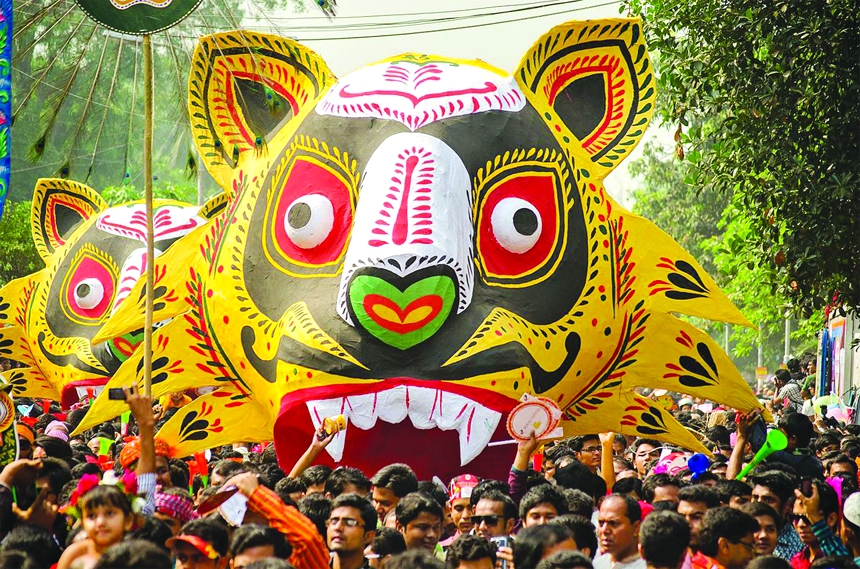 Benoy Dutta :
For Bangalis, PahelaBaishakh is one of the oldest and most celebrated festivals. The first day of the Bangla New Year in a Bangla calendar is known as Pahela Baishakh. Dating back to an early period in history, Pahela Baishakh has become a festival emanating from the heart of the whole Bangla-speaking world, irrespective of caste, creed and religious beliefs.
The history of celebrating Pahela Baishakh is very old. Dividing a year into 12 months is an old practice according to the Hindu calendar. But during Mughal rule in India, Emperor Akbar ordered that the Bangla year be counted combining the Arabic calendar from March 10 or March 11 in 1584. Though originally called a Fosholi Shon (crop year), it later gained currency as the Bangla year.
In Akbar's days, the economy of undivided Bengal was solely based on agriculture, with most people making their living through agricultural work of one kind or the other. Some people did enter other professions, but they, too, worked in the fields for a brief period of time. Farmers did not have any cash till the crops were harvested; so they had to buy daily necessaries all the year round on credit from shopkeepers. Since all the dues were cleared up toward the end of the year, shopkeepers tracked the sales on credit in a ledger book known as the "halkhata." After previous dues were cleared up, a new ledger book opened and each farmer had a fresh entry on the book for the New Year, and the whole process would then start all over again. So, creditors arranged a celebration honoring the farmers who lived up to their promises of paying the dues after the harvest, a custom observed in many parts of Bangladesh to this day. This celebration diversified over the centuries and became widely popular among all sections of society. In Bangladesh, Chhayanaut took an initiative to popularize this festival, turning it into a celebration of greeting the new Bangla year. It was also a time when Pakistani military rulers were contemptuous toward any manifestation of our secular culture.
Pahela Baishakh now is a universal phenomenon among Bangalis. The first day of the Bangla calendar is celebrated in big cities with much fanfare, music and a feast of various local cuisines, and with high hopes that the Bangla New Year will bring prosperity and happiness for all.
Pahela Baishakh is celebrated all over the country at city, district, union and upazila levels. With the crack of dawn, a tinge of festivity spreads in every nook and cranny of the country. In the capital city, Chhayanaut opens the festivity at the Batamul (under the banyan tree) in Ramna Park with a number of impeccable musical renditions composed by five of the best poets and lyricists in the Bangla language (Rabindranath Tagore, Kazi Nazrul Islam, Dwijendralal Roy, Rajanikanta Sen and Atul Prasad Sen). Large numbers of crowds throng the park to greet the New Year with Chhayanaut. The celebration of the Bangla New Year and Chhayanaut's programs are now inseparably connected.
Chhayanaut first celebrated the Bangla New Year in 1967 (1374 in the Bangla calendar) under the ashwatha tree in Ramna Park. Except in 1971, the year that saw the Liberation War, Chhayanaut has been celebrating the day religiously with musical renditions and poetic recitations. Besides Chhayanaut's program, a colorful, ceremonious procession welcoming the New Year is brought out from the Institute of Fine Arts (Charukola Institute), University of Dhaka. Known as the "MangalShobhajatra," it was first brought out in 1989 in the hope of ousting despotic forces from the country's politics, seeking peace and justice for all. Charupith, a regional cultural organization, had earlier brought out a similar procession in 1986. Inspired by this, one of its initiators, Jamal Shamim, who enrolled in a master's degree course at Dhaka University, started this at Charukala with replicas of horse, elephant, etc. Â
Since 1991, Charukola Institute has been bringing out the procession with massive replicas of elephants, tigers that have added new hues to this carnival, enriching it each year with more and more replicas, handicrafts and masks of birds, owls, crocodiles, earthen dolls, oxcarts, palanquins, boats, hand fans-everything crafted in sync with the tenets of local, indigenous cultures. UNESCO has incorporated this procession in its "Representative List of Intangible Cultural Heritage of Humanity" in 2016.
Apart from these, the entire city buzzes with programs and arrangements marking the day. In the old part of the city, businessmen and traders remain busy all day with halkhata festivities. The Baishakh fair in the field of Dhupkhola demonstrates how much passionate Bangalis are about festivals. The TSC area of Dhaka University vibrates with music and thousands of men and women, mostly young, hanging around in groups wearing colorful dresses. Women prefer green saris with red lining, and men green and red Punjabis, reflecting the colors of Bangladesh's national flag. Now each area in the city has its own set of programs. Among others, the cultural programs at RabindraSarobar in Dhanmondi have gained some prominence in recent times.
Pahela Baishakh is not celebrated only in Dhaka; it is celebrated with equal pomp and fanfare in other parts of the country as well. People from the Chittagong Hill Tracts also celebrate the day with various indigenous programs of their own. Boishukh by the Tripura, Sangrain by the Marma and Biju by the Chakma are three such programs to mark this day. In recent years, the three communities have celebrated this day together, which is called "Boishabi." One of the main aspects of Boishabi is a water festival by the Marmas, which sees young boys and girls splashing water on each other, signifying their coming of age.