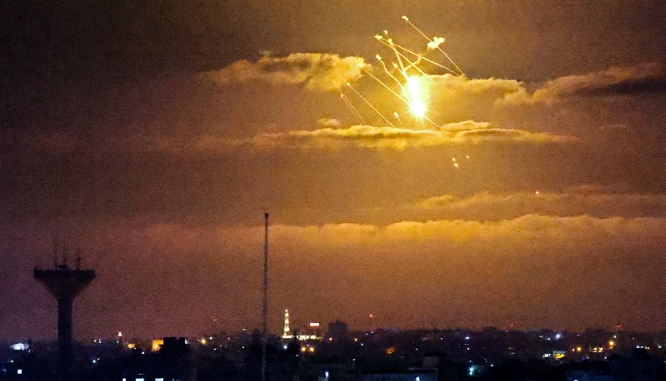 Flames and smoke rise over the central Gaza Strip as Israeli warplanes retaliate against rocket fire into southern Israel in the biggest escalation in months.

BSS/AFP :
Israel said that it would close its only crossing from the Gaza Strip for workers on Sunday in response to overnight rocket fire, stopping short of conducting retaliatory strikes in an apparent bid to ease tensions. The rocket attacks on Friday night and Saturday morning followed days of clashes at Jerusalem's flashpoint Al-Aqsa mosque compound and a month of deadly violence.
The unrest-which comes as the Jewish festival of Passover overlaps with the holy Muslim fasting month of Ramadan-has sparked international fears of a wider conflict, one year after similar violence led to an 11-day war between Israel and Gaza-based militants.
"Following the rockets fired toward Israeli territory from the Gaza Strip last night, it was decided that crossings into Israel for Gazan merchants and workers through the Erez Crossing will not be permitted this upcoming Sunday," said COGAT, a unit of the Israeli defence ministry responsible for Palestinian civil affairs.
Two rockets were fired from Gaza at southern Israel on Friday night, one of them hitting the Jewish state and the other falling short and striking near a residential building in northern Gaza, Palestinian and Israeli sources said.
A third rocket was fired at Israel on Saturday morning, the army said, with no air raid sirens activated for any of the launches. They followed rocket attacks on Wednesday and Thursday, and came as Israeli police clashed with Palestinian protesters at Al-Aqsa mosque, leaving at least one man hospitalised in serious condition.
Israel had retaliated against those attacks with air strikes, but in an apparent desire to prevent further violence, shifted its response this time to the painful economic measure of closing Erez, implying that further rockets would extend the penalty.
"The re-opening of the crossing will be decided in accordance with a security situational assessment," COGAT added. Employment in Israel is a lifeline for people in Gaza, where according to a recent World Bank report nearly half of the 2.3 million population is unemployed.
There are currently 12,000 Gazans with work permits in Israel, with the government recently announcing its intention to add another 8,000. More than 200 people, mostly Palestinians, have been hurt in clashes in and around Al-Aqsa in the past week.
Palestinians have been outraged by massive Israeli police deployment and repeated visits by Jews to the holy site. Early on Friday, the Palestinian Red Crescent said 57 people were wounded after police stormed the compound in Israeli-annexed east Jerusalem's Old City when Palestinians began hurling stones towards the Western Wall, the holiest site where Jews can pray.


And after midday prayers, some Muslim worshippers chanted "incitement" and tried to damage a police post, police said, using a drone to spray tear gas from the air, AFP reporters said. Saturday morning prayers, however, passed without incident, with Israeli officials estimating that 16,000 Muslims participated.
Al-Aqsa is Islam's third-holiest site, and the most sacred site in Judaism where it is known as the Temple Mount. By long-standing convention, Jews are allowed to visit under certain conditions but are not allowed to pray there. The escalating unrest prompted concern at the United Nations, which on Thursday demanded a probe into the Israeli police actions.
"The use of force by Israeli police resulting in widespread injuries among worshippers and staff in and around the Al-Aqsa mosque compound must be promptly, impartially, independently and transparently investigated," said Ravina Shamdasani, spokeswoman for the UN Office of the High Commissioner for Human Rights.
Israel is braced for more violence, however. The unrest in Jerusalem stirred emotions among Israel's Arab population, with hundreds marching in the Arab-Israeli city of Umm al-Fahm in support of Al-Aqsa mosque.Skirmishes at the end of the march evoked images from last year's conflict with Gaza that saw rioting in Arab cities within Israel.
Police said on Saturday they had arrested four masked men in Umm al-Fahm who had "tried to block the entry to the city, fired flares, threw stones at forces and burnt tyres on the main road".