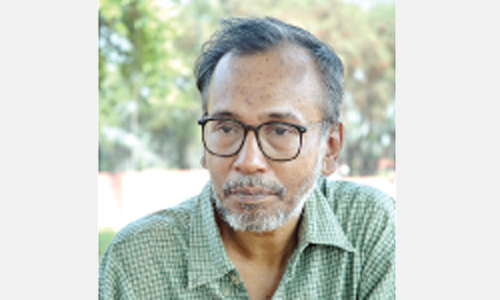 Sheikh Arif Bulbon :
Jatiyo Smriti Soudho or the National Martyrsâ Memorial is the national monument of Bangladesh. It is the symbol in the memory of the valour and the sacrifice of all those who gave their lives in the Bangladesh Liberation War of 1971, which brought independence and separated Bangladesh from Pakistan.
The monument is located in Savar, about 35 km north-west of Dhaka. It was designed by architect Syed Mainul Hossain.
Design History
The main plans of this monument were initiated after the independence in 1972. But due to many problems, it was delayed after 1972-1978. But in 1978, a nation-wide design competition was held in June for the site selection, road and land development about this monument. Plans for the monument were initiated in 1976.
Following evaluation of the 57 submissions, Syed Mainul Hossainâs design was chosen. The main structure and the artificial lake and other facilities were completed in 1982.
It was inaugurated on December 16, 1982.
This beautiful environment creates this monument very attractive. The monument tower is made by concrete and other structures and pavements are made by red bricks.
This red bricks reminds us about the blood of the 30 lakh people, who sacrificed their blood for the liberation of Bangladesh.
Architecture
The area of the monument and its compound is 34 hectares (84 acres) with a surrounding buffer zone of additional 10 hectares (24 acres) green belt of planted bushes and trees.
The monument with its pointed spires stands to speak of the victory and triumph and link the patriotic people, the martyrs and the living freedom fighters in an eternal bond.
The tower tapers upwards on seven isosceles triangles signifying the seven stages of the national movement that led to the independence of the country. The seeds of the movement sprouted through the struggle for the honour of the national language, Bangla in 1952 and thereafter grew in phases through the mass upheavals of 1954, 58, 62, 66, 69 and eventually the liberation movement in 1971.
The monument is composed with 7 isosceles triangular pyramid shaped structures but the middle one being the tallest.
The highest point of the monument is 150 feet. 7 isosceles triangular pyramids remind us our seven Bir Sreshthos. This unique arrangement of the planes has created a structure that seems to change its configuration when viewed from different angles. Several mass graves and a beautiful reflection water body are placed in front of this monument.
If anybody enters into the complex through the main gate, he or she can see the monument axially. But to reach it one has to walk through different ups and downs of pavements and cross an artificial lake by a bridge-all these represent the struggle for independence.
There is an artificial lake, and several mass graves in front of the main monument. There is a green house, PWD site office, VVIP and VIP waiting room inside the area. Some other structures like toilets, visitors shed, electrical sub station, flower and souvenir shop, police barrack, museum and laser show is under construction.
Present Scenario
The Public Works Department of the Government of Bangladesh supervised the construction of the project. But this project was constructed in three times. The first project was involved in acquiring land and constructing road for the project. It was in 1972. The cost of this project was 26 lakhs. The second project was in 1974-1982. The cost of this project was 3.77 crores. This project was involved in to build the mass graves, pavements, parking spaces, helipad etc. And the third project was in August 1982.Â  The cost of this project was 848.65 lakhs. This project was involved in to build the main structure, apart from the artificial lake, green belt, cafeteria, housing etc.
Now, this monument shows the countryâs history and this is one of the major tourist spots of the country. Everyday lots of people visit here to see this extra-ordinary monument specially on December 16.
To keep this monument stands upright with honour, prestige and dignity we need to be ready always to sacrifice our lives also. n