Ex-PM flees to naval base as arson attacks spread 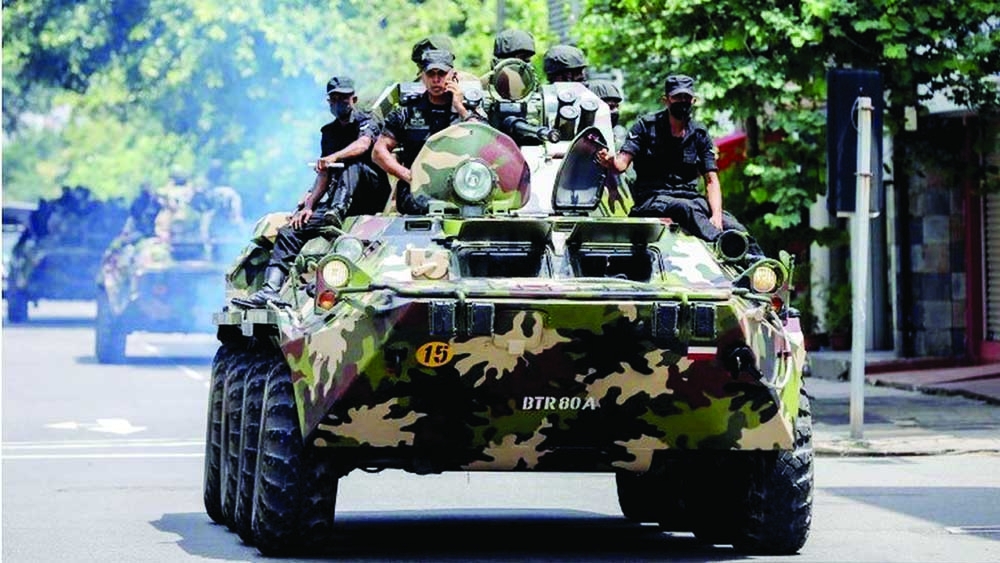 Army soldiers seen on armoured cars in Colombo, Sri Lanka on Wednesday after the curfew was extended by a day following clashes between government loyalists and anti-government demonstrators. Agency photo

BBC Online :
Security forces are out in force across Sri Lanka with orders to shoot looters on sight amid continuing protests at the government's handling of a devastating economic crisis.
Despite a nationwide curfew, there was a second night of arson attacks.
Shops near Colombo were torched, as well as a resort owned by former Prime Minister Mahinda Rajapaksa's son.
The ex-PM is holed up in a naval base after resigning on Monday when fury erupted over fuel and food shortages.
At least nine people have been killed and about 200 injured in unrest since Monday.
It began when government supporters attacked protesters who are demanding that President Gotabaya Rajapaksa, the former PM's younger brother, should leave office.
Opposition politicians have warned the violence could have been staged to give the army a pretext to take power. Rumours of a possible coup have been fuelled by the presence of large numbers of troops with armoured vehicles on the streets. But the military have denied any such move is planned. "When there is a dangerous situation in the country, powers are given to the military to deal with it," Defence Secretary Kamal Gunaratne told a news conference.
"Don't ever think that we are trying to capture power. The military has no such intentions."
Sri Lanka had already seen weeks of protests over its dire financial situation, which has caused the Sri Lankan rupee to plunge, provoking severe shortages of basic items such as food, fuel and medical supplies.
The worst trouble overnight was in the north of the capital, Colombo, where rival groups set fire to shops in the town of Negombo.
On Monday night, mobs burned more than 50 houses belonging to politicians, while a controversial museum dedicated to the Rajapaksa family was also razed to the ground in their traditional heartland, Hambantota, in the country's south.
Shops, businesses and offices are shut for a third day on Wednesday under a nationwide curfew in place until Thursday morning.
A meeting between Sri Lanka's political party leaders has been moved online over security concerns.
The streets of the capital, Colombo, bear the evidence of this week's rioting - a heavy police presence, troops on the streets, and overturned and burnt buses after Monday's violence.
Nonetheless, protesters continue to gather despite the curfew at Galle Face Green, the main protest site in Colombo. They insist President Rajapaksa has grossly mismanaged the economy and must stand aside.
He is the last Rajapaksa family member in office and the resignation of his brother as prime minister did nothing to placate demonstrators or bring calm.
President Rajapaska says he is holding talks with other political parties aimed at forming a unity government. But the main opposition says it will not be part of the interim administration unless the president stands down.
At present, there is no clarity on which political parties might come together to form such a government.
The political stalemate comes as Sri Lanka attempts to iron out a bailout package with the International Monetary Fund (IMF) - the island's $81bn economy is near bankruptcy.
It has suspended its foreign debt payments, largely because it cannot service loans from China that paid for massive infrastructure projects.
While the pandemic hit the vital tourism sector and shrank Sri Lanka's earnings and foreign exchange reserves, experts say problems have been exacerbated by populist tax cuts in 2019 and a disastrous ban on chemical fertilisers in 2021 that devastated crop yields.
Protesters gathered in front of Trincomalee Naval Base in the north-east after reports that Mahinda Rajapaksa had fled there with his family after escaping from his Colombo residence when it was besieged by crowds on Monday night.
The military confirmed on Wednesday that he was inside the base.
"We took Mahinda to the naval base for safety reasons," the defence secretary said.
Earlier, there had been rumours that Mr Rajapaksa and others in the family had fled to India, which the Indian High Commission in Colombo denied.
Sri Lankans are still reeling from the violence that has erupted. Many politicians are sheltering in safe houses or avoiding appearing in public.
"It is not at all safe, particularly for politicians on the government side," Nalaka Godahewa, until recently media minister, told the BBC. His house was among those torched.
Mahinda Rajapaksa, once celebrated by the majority Sinhalese as a war hero for defeating the Tamil Tiger rebels, has suddenly become a villain. Many blame his supporters for targeting anti-government protesters, which then set off a chain of violent events.
The Rajapaksas have always stood together, but this time, their differences are out in the open. The problem appears to have started after Gotabaya asked the family patriarch Mahinda to "take one for the team" and resign.
How the family, who have dominated Sri Lankan politics for years, overcome this crisis is now an open question.