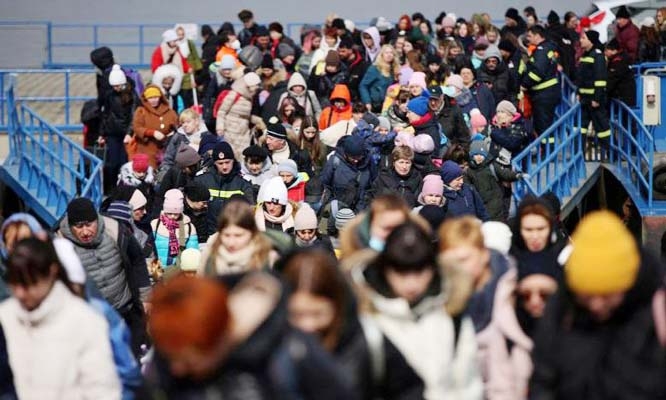 Human exit from Ukraine on account of invasion by Russia a month ago.

BSS :
More than six million refugees have fled Ukraine since Russia's invasion began on February 24, figures from the UN refugee agency said on Thursday.
A total of 6,029,705 people had fled Ukraine as of May 11. Many had gone to neighbouring countries before continuing their journey, according to the agency's dedicated website, with Poland hosting the largest number.
Women and children represent 90 percent of the refugees, with Ukrainian men aged 18-60 unable to leave due to being eligible for military service.
The International Organization has also internally displaced a further eight million people, according to a study for Migration.Daily refugee flows across Ukraine's borders have decreased considerably since the outbreak of war. In March alone, almost 3.4 million Ukrainians fled their country. That figure dropped to around 1.5 million in April.Almost 493,000 Ukrainians have sought refuge abroad since the beginning of May.
The UN refugee agency has said around 1.6 million Ukrainians have returned, some temporarily and some to resettle in areas where fighting has stopped, particularly around the capital Kyiv.
The United Nations has estimated that more than eight million people could flee Ukraine this year.Ukraine's pre-war population was 37 million, excluding the annexed Crimea peninsula and two separatist regions in the east controlled by pro-Russia separatists.
A wave of solidarity has swept through neighbouring countries and across Europe to alleviate the continent's worst refugee crisis since World War II. Individuals, NGOs, associations and governments have acted to welcome and settle Ukrainian refugees.Poland has welcomed more than three million refugees since the war in Ukraine began, by far the highest number.
Romania, Hungary, Moldova and Slovakia have also seen hundreds of thousands of people cross their borders, although many refugees transit through those countries to reach other destinations.
More than 785,000 refugees have moved to Russia and a small number have fled to Moscow's ally Belarus, according to the UN data.