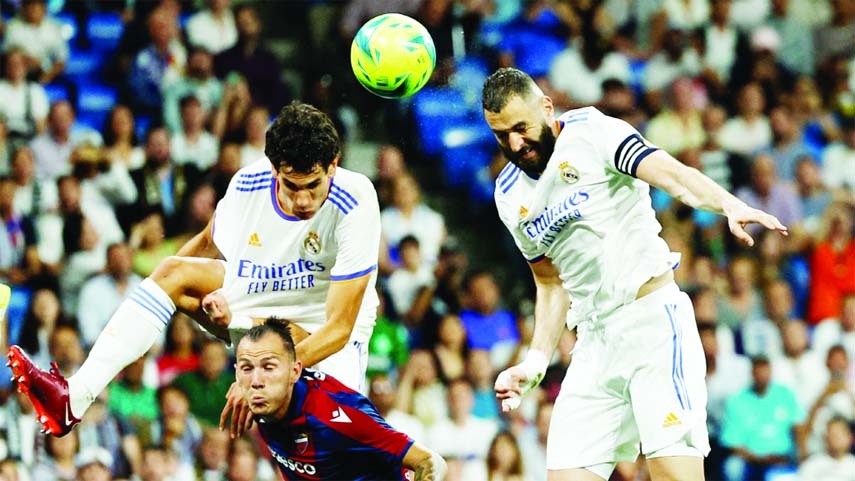 Real Madrid\'s Karim Benzema ( right) scores their second goal against Levante during their Spanish La Liga match at the Santiago Bernabeu on Thursday.

Agency :
Real Madrid continued their preparations for the Champions League final with a comfortable 6-0 win at home to Levante on Thursday.
First-half goals from Ferland Mendy, Karim Benzema, Rodrygo and Vinicius Jr gave Madrid a 4-0 lead as Carlo Ancelotti continued to rotate his side ahead of the final in two and a half weeks.
Vinicius scored his second of the game in the 68th minute and completed his hat-trick seven minutes from time against a rival that appeared to accept their fate.
The result means Levante become the first side of the season to be relegated to the second division, given they have an inferior head-to-head goal average with fourth from bottom Cadiz.
Karim Benzema drew level with Real Madrid great Raul as the Spanish giants' second-highest goalscorer by netting his 323rd goal for the club in a 6-0 thrashing of Levante on Thursday.The France striker headed in Real's second goal against Levante at the Santiago Bernabeu to reach the mark.
Cristiano Ronaldo remains well clear at the top of Madrid's all-time goalscoring charts with 451.
Benzema has now scored 44 times in as many appearances this season as Carlo Ancelotti's side have wrapped up the La Liga title and reached the Champions League final, where they will play Liverpool in Paris on May 28.
Ferland Mendy opened the scoring for Madrid before Benzema's effort. Levante had no answer as Rodrygo bagged another and Vin-cius Junior a hat-trick in a thrashing that consigned the beaten club to relegation.
Real Sociedad beat Cadiz 3-0 in the first kick-off of the day to ensure they will play at least Conference League next season.
Alexander Sorloth put the home side ahead in the 19th minute of the game and penalties scored by Adnan Januzaj in the 53rd minute and Portu deep in injury time mean the team from San Sebastian can finish no lower than seventh this season.
The result also means that Cadiz still have work to do to avoid relegation and this weekend's match against Alaves will be vital to their survival.
Villarreal also took a big step towards qualifying for Europe next season as they won 5-1 away to Rayo Vallecano.
Alfonso Pedraza put the visitors ahead in the third minute and although Sergi Guardiola pulled a goal back for Rayo, Juan Foyth, Paco Alcacer and Pau Torres made it 4-1 to the visitors before halftime.
Pedraza netted a second in the second half to seal an easy win for the visitors.
The win leaves Villarreal four points clear of eighth-place Athletic Club Bilbao, who lost 1-0 to Granada on Tuesday.
Other results this week saw FC Barcelona win 3-1 at home to Celta, while Atletico Madrid assured a place in next season's Champions League with a 2-0 win in Elche, who are safe from relegation.