He has been charged with embezzling over Tk11,000cr 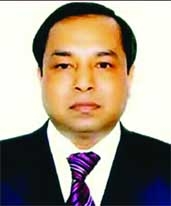 Staff Reporter :
Fugitive Bangladeshi and former NRB Global Bank Managing Director Proshanta Kumar Halder (PK Halder) along with five others, were arrested on charges of earning illegal assets in Ashoknagar of the Indian state of West Bengal on Saturday morning.
PK Halder was hiding in foreign countries to avoid police arrest after filling of a corruption case for earning illegal assets against him.
The arrest of PK Halder was made during multiple drives in at least nine places of Kolkata, North and South 24 Parganas by Indian intelligence agency Enforcement Directorate (ED) with the request of Bangladesh government.
PK Halder earned about Tk 933 crore, flats and hotels.
PK Haldar was a fugitive in Indiaâs West Bengal with 34 cases filed against him for several corruption allegations.
PK Haldar has become the owner of Tk 933 crore in just 10 years, which has been mentioned in the chargesheet of ACC cases submitted to the court.
The bank accounts of 83 associates of PK Haldar have so far been suspended. Besides, land, houses, flats and other immovable property worth about Tk 933 crore have been seized.
To conceal the location of his illegal assets, PK Halder transacted money through 178 bank accounts. He deposited Tk6,080 crore in these accounts and withdrew Tk6,076 crore from them in his name and anonymously.
According to the ACC, PK Halder has swindled at least Tk11,000 crore from various organisations.
Meanwhile, 13 accused have been arrested and questioned on remand. Of them, 11 accused pleaded guilty in court under Section 164 of the Code of Criminal Procedure.
Anti-Corruption Commission lawyer Khurshid Alam Khan on Saturday told reporters that the Indian officials arrested PK Halder around noon.
According to the ACC chargesheet, PK Haldar bought land, flats and hotels in different parts of the country and outside the country anonymously. He became the owner of this huge assets between 2009 and 2019. But his legal asset is only about Tk 12 crore. He has also huge properties in the name of his close relatives.
Among the 35 cases against PK Haldar, there are cases of embezzlement as well as money laundering. PK Haldar has also smuggled Tk 80 crore to Canada.
According to Indian newspapers and agencies, PK Halder was hiding in a house in Ashok Nagar in the North 24 Pargana district. ED also arrested his five associates including his wife and brother.
"Now there are some formalities. If he has committed a crime under any Indian law, he will be taken to court there. He will be shown arrested under that law," said Khurshid Alam Khan.
He also noted that PK Halder will be handed over to Bangladesh under the Bangladesh-India extradition treaty.
"After extradition, he will be presented to the court in Bangladesh. Then remand will be sought from the ACC," he added.
All the suspects had fraudulently obtained Indian citizenship papers, reports Hindustan Times.
"The money siphoned from Bangladesh was used for buying a huge quantity of land and property in West Bengal and Kolkata," an ED official said seeking anonymity.
"The money was taken as loan from various banks by companies that only exist on paper. Realising that they had been cheated, the banks informed the financial intelligence unit of the Bangladesh police that subsequently approached the Indian government," the officer added.
PK Halder had been living in West Bengal posing as an Indian citizen. He used the name Shibshankar Halder after procuring a ration card issued by the West Bengal government, Indian voter ID card as well as PAN and Aadhar card, an ED statement said.
ED officials found that the suspects had set up companies in India on the basis of these documents and also purchased immovable property at various places, including Kolkata.
The money embezzled in Bangladesh was siphoned to other countries as well, the statement said.
Earlier, the Anti-Corruption Commission filed the case on 8 January 2020 against PK Halder for allegedly acquiring illegal assets worth around Tk275 crore.
PK Halder, who has been absconding, acquired illegal assets worth around Tk426 crore in various illegal ways in his name and under various real and fake companies and individuals, according to the chargesheet.
PK Halder has embezzled around Tk3,500 crore from ILFSL, Tk2,200 crore from FAS Finance, Tk2,500 crore from Reliance Finance and Tk3,000 crore from People's Leasing. There is almost no mortgage against all these loans, so the chances of recovering the loans are slim, said the ACC.
After investigations, the ACC has already filed several cases.