Nayeem returns to Test cricket with 6 wkts for 105 runs 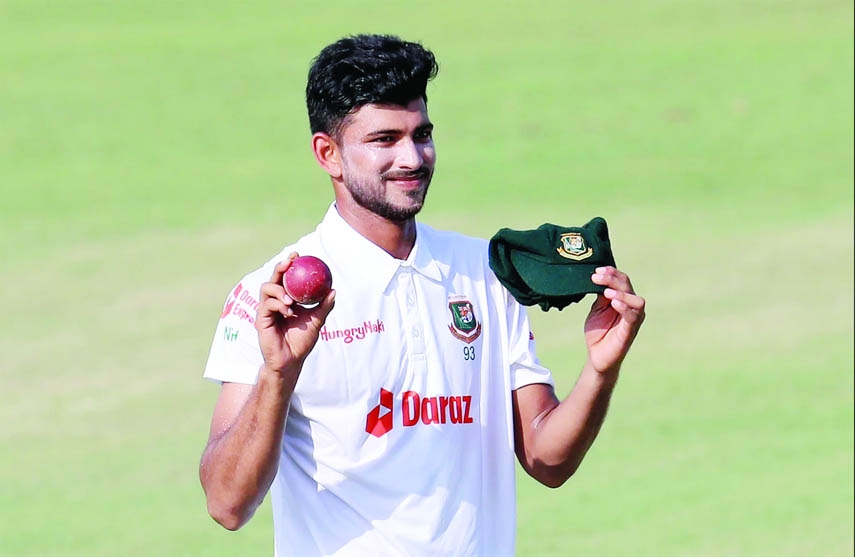 Sports Reporter :
Right-arm spinner Nayeem Hasan of BangladeshÂ  returned to Test cricket with six wickets at the cost of 105 runs. Nayeem completed his superb spell as 30-4-105-6 against Sri Lanka on the second day play of the first Test cricket match at the Zahur Ahmed Chowdhury Stadium (ZACS) in Chattogram on Monday.
Before this Test match, Nayeem Hasan played only seven Test cricket matches in his three-and-half-year long Test career. All-rounder Mehidy Hasan Miraz could not play the first Test against Sri Lanka due to injury. In absence of Miraz, Nayeem Hasan has been called in the Test squad by the Bangladesh Cricket Board (BCB) and Nayeem Hasan proved that he has the ability to show a superb bowling performance. Nayeem Hasan, the right-arm off spinner captured two wickets at the cost of 71 runs on the first day against Sri Lanka on Sunday.
Later, Dinesh Chandimal was trapped leg before wicket by Nayeem Hasan when Sri Lanka's score was 319 for the loss of five wickets.
Niroshan Dickwella (3) was bowled out by Nayeem Hasan when the islanders' total was 323 for the loss of six wickets.
Ashitha Fernando (1) was bowled out by Nayeem Hasan and Nayeem fulfilled his five-wicket haul. Then, he dismissed in-form Angelo Mathews and finished his superb bowling performance.
Nayeem Hasan made his debut on November 22 in 2018 against West Indies at the ZACS in Chattogram. He was the youngest bowler, who captured five wickets in Test cricket.