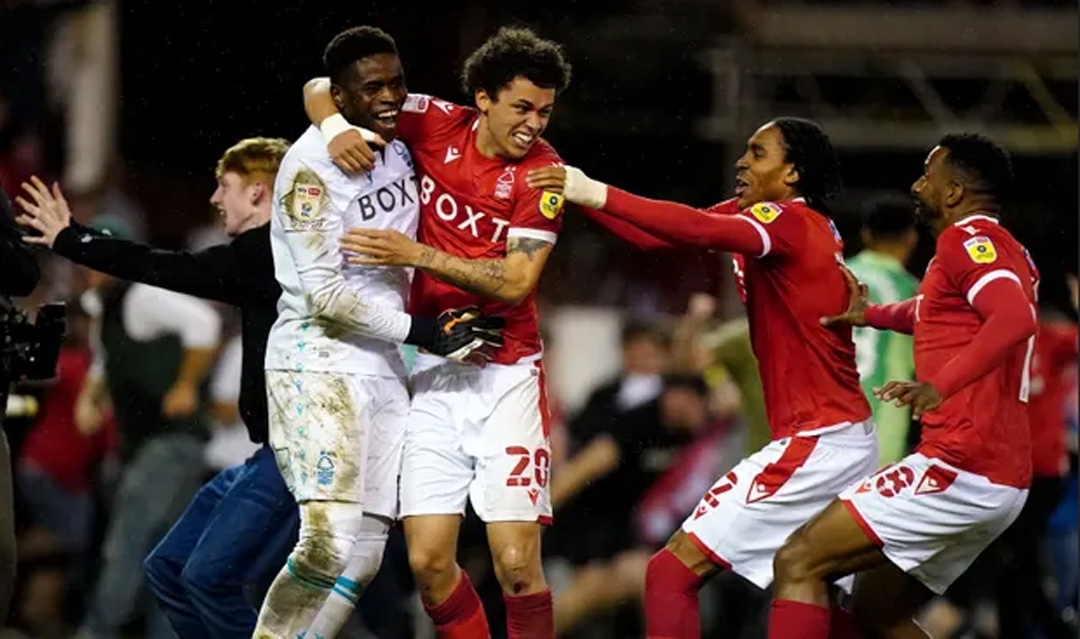 Brice Samba (left) celebrates with his Nottingham Forest teammates after they defeated Sheffield United on penalties in the playoff semi-final on Tuesday. Agency photo

AFP, London :
Nottingham Forest are one game away from returning to the Premier League for the first time since 1999 after edging out Sheffield United on penalties in a dramatic Championship playoff semi- final.
Forest led 2-1 from the first leg and looked set for Wembley when Brennan Johnson blasted into the top corner on 19 minutes.
However, the Blades fought back after the break as goals from Morgan Gibbs- White and John Fleck sent the tie to extra-time.
The visitors were only denied a remarkable fightback by a brilliant save from Brice Samba five minutes from time as he spread himself to block Iliman Ndiaye's effort.
And Samba was the Forest hero in the shootout as he saved from Oliver Norwood, Conor Hourihane and Gibbs-White.
Johnson, Cafu and Steve Cook scored from the spot for Steve Cooper's men to continue an incredible turnaround in fortunes at the City Ground.
Forest were bottom of the table when Chris Hughton was sacked in September. They narrowly missed out on automatic promotion behind Fulham and Bournemouth, but will have another shot in the richest game in world football when they face Huddersfield at Wembley on May 29.