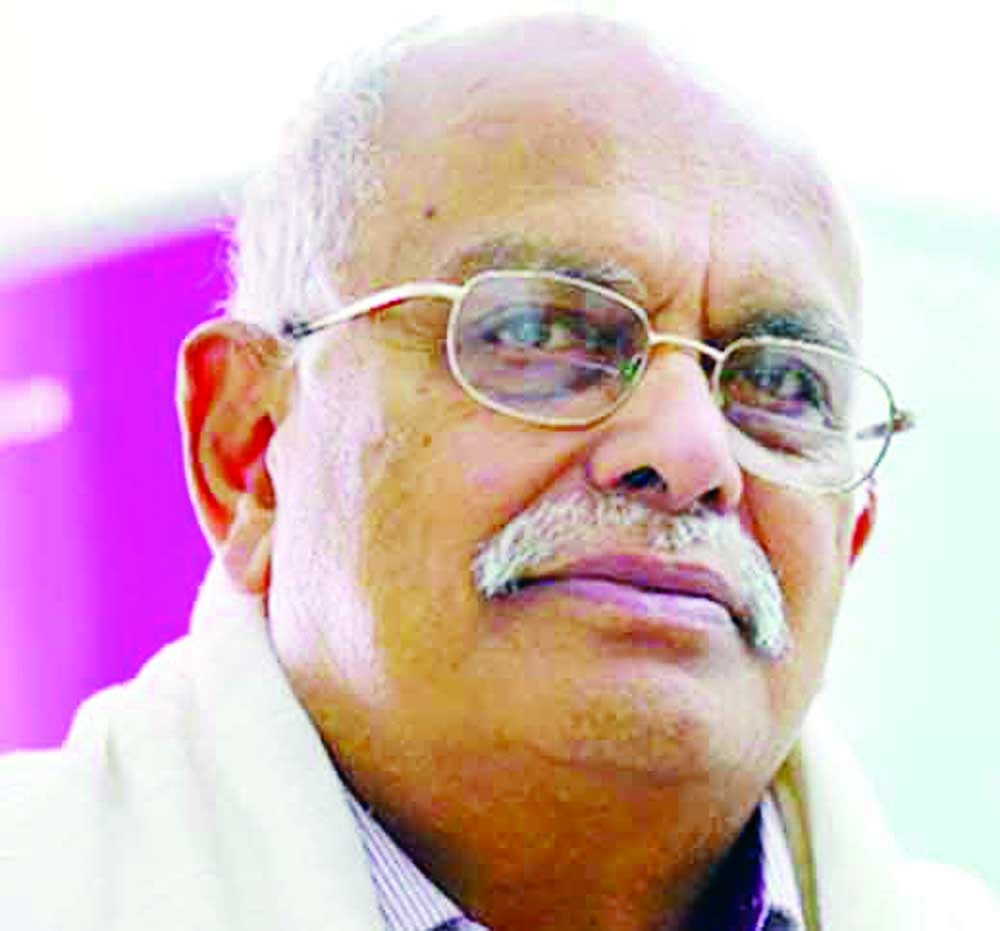 Staff Reporter :
"Amar Bhaiyer Rokte Rangano" famed lyricist, journalist, political analyst, columnist and writer Abdul Gaffar Chowdhury died in London on Thursday. He was 88.
He died of a cardiac arrest in a hospital in
London at 6:49am local time on Thursday.
Bangladesh High Commission in London is in touch with his family members regarding the next step, an official told the media.
President Abdul Hamid, Prime Minister Sheikh Hasina, speaker Shireen SharminÂ  Chowdhury different ministers, and distinguished personalities expressed profound shock and sorrow at the demise of Gaffar Chowdhury.
In a condolence message, the President said that Bangladesh had lost a pioneer who was progressive, creative, and believed in the spirit of the Liberation War. His immortal song on language movement gave immense courage and inspiration to the Bengali nation during the Liberation War.
President Hamid also prayed for the departed soul of Gaffar Chowdhury and conveyed his deepest condolences to his bereaved family.
In a message of condolence, the Prime Minister prayed for the salvation of the departed soul and conveyed deep sympathy to the bereaved family.
"Gaffar Chowdhury continued his works throughout his life to present the actual history to the nation supporting the pledge of the Father of the Nation to build a nation free from injustice and upholding the non-communal spirit of Bangalees," she said.
Sheikh Hasina said that during the Liberation War Gaffar Chowdhury encouraged the freedom fighters through his writings in the Bangladesh Government registered weekly 'Joy Bangla'.
"Despite living abroad, through his write-ups he presented the ideology of the Liberation War of Bangladesh to the national and international media," she said.
Road Transport and Bridges Minister Obaidul Quader and Foreign Minister Dr AK Abdul Momen have also expressed deep shock at the death of the eminent journalist.
In a condolence message, the Foreign Minister said that Abdul Gaffar Chowdhury's contribution to the journalism of Bangladesh was remarkable.
Born in the Ulania village in Mehendiganj, Barisal to Hazi Wahed Reza Choudhury and Zohra Khatun on December 12, 1934, Chowdhury completed his Intermediate Examination from Dhaka College in 1953 and BA from Dhaka University in 1959.
During his student life, he wrote the elegy for the language martyrs which confirmed his glory as a lyricist for eternity. Known as the "Ekusher Gaan," the song was first tuned and composed by Abdul Latif, and later recomposed by Altaf Mahmud in 1969.
After his graduation, Chowdhury began his career as a journalist and worked in different national newspapers in Dhaka. He worked for Joy Bangla, Jugantar and Anandabazar Patrika during the 1971 Bangladesh Liberation War.
He went to London, the United Kingdom, in 1974 for the treatment of his wife Selima Chowdhury. He, however, could not return to Bangladesh for 22 years after the assassination of Bangabandhu Sheikh Mujibur Rahman in 1975.
Living in the UK as a well-respected journalist and columnist, Chowdhury began writing columns in national Bangladeshi dailies, Bengali newspapers of the Bangladeshi community, and a daily paper in Kolkata. He also founded the newspaper 'Notun Din.'
As a writer, Chowdhury authored a total of 35 five books including "Dan Pithe Shawkat", "Chandrodwiper Upakhyan", "Nam Na Jana Bhore", "Nil Jamuna", "Shesh Rajanir Chand", "Polashi Thekey Dhanmondi", "Bastobotar Nirikhey" and others.
Documenting a book on the assassination of Bangabandhu, Gaffar Chowdhury authored "Polashi theke Dhanmondi" which was later staged as a play in the UK in 2004 and later adapted into a film under the supervision of Chowdhury himself.
According to many political analysts in the country Chowdhury's direct participation in the democratic movement and reflection of observation through his concise writing style in his newspaper columns helped in the restoration of the real history of Bangladesh in the world's media.
His views, thoughts and comments on politics combined a personal style with accurate, inside information, and explained military, political, strategic and tactical assumptions of all sides in Bangladesh's complex conflict, and his columns got overwhelming responses from the readers.
For his illustrious and iconic career,Â  Chowdhury received many awards including the Shwadhinata Padak, Bangla Academy Literary Award, Ekushey Padak, UNESCO Literary Award, Bangabandhu Award, and Shanghati Lifetime Achievement Award, to name a few.
Bangladesh High Commissioner to the United Kingdom Saida Muna Tasneem has expressed deep shock over Gaffar Chowdhury's death. In a condolence message, she said, "I am deeply saddened by the death of Abdul Gaffar Chowdhury."
She said the nation lost one of his best sons and the British-Bangladeshi community lost their lighthouse and guardian.
The High Commission said it will inform everyone in time about the Janaza, burial and other matters of late Abdul Gaffar Chowdhury.