JL chief urges not to use organisational titles for personal gain 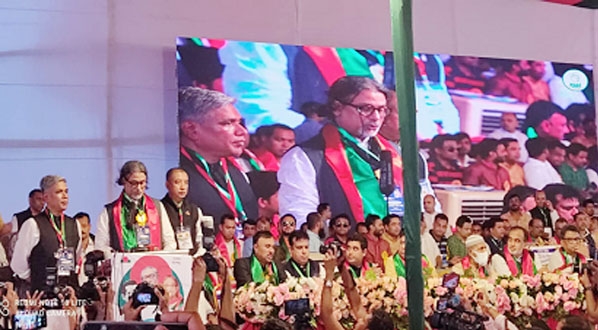 Chattogram Bureau :
Central Juba League Chairman Sheikh Fazle Shams Parash has said that organizational posts are not for personal gain.
He was speaking as the chief guest at the conference of North District Juba League held at Hathazari Parvati School ground on Sunday (May 29).
He said that the organizational position will be used only for organizational work. Organizational positions are not meant to weigh one's personal pockets. Not for personal gain. Organizational position is not a product bought from any market. I promise publicly, you don't have to pay any gift to get the position from us. No financial support is required. So our expectation is, organizational terms should not be used for extortion tender bidding.
He further said that the reign of landslide infiltrators in the organization should be stopped. We hope that you will select and evaluate the dedicated and experienced leaders and workers. You will consider those who have struggled in the difficult times of the party, endured imprisonment, torture, abandonment and torture. Consider their past activities and activities.
Parash said, request to you do not be corrupt. Corruption has eaten Bangladesh from within. Corruption is difficult to eradicate but controllable. Juba League will be able to control corruption. It is not possible to control corruption by law.
Corruption must be controlled through social movement. People need to be involved in controlling corruption.
Central General Secretary Mainul Hossain Khan Nikhil is present as the keynote speaker at the conference. Awami League presidium MP Mosharraf Hossain is present as guest, Awami League joint general secretary Information Minister Hasan Mahmud and organizing secretary Abu Saeed Al Mahmud will give virtual speeches. Special guests were North District President MA Salam, General Secretary Sheikh Mohammad Ataur Rahman, MPs Mahfuzur Rahman, Didarul Alam and Khadijatul Anwar, Juba League Chittagong Division Acting Joint-General Secretary Barrister Sheikh Fazle Naeem, Organizing Secretary Md. Saifur Rahman Sohag, Publicity and Publication Secretary Joydev Nandi, Deputy Publicity and Publication Secretary Aditya Nandi and Executive Committee Member Niaz Morshed Elit.