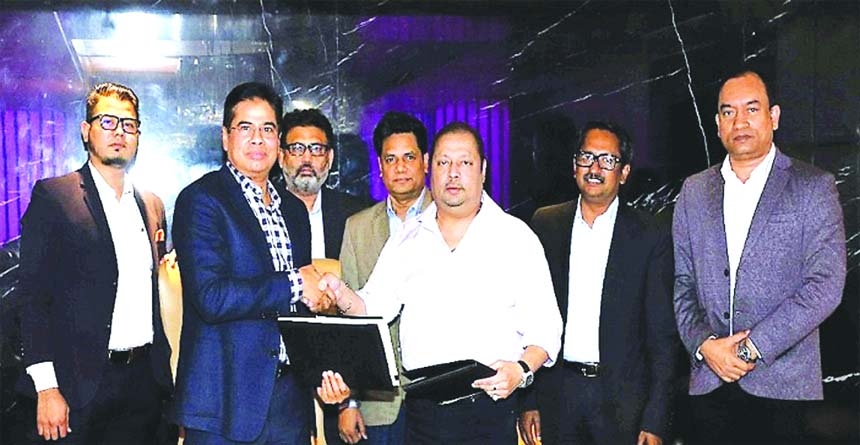 Business Desk :
PowerPac Economic Zone Private Limited, a concern of Sikder Group and Deshbandhu Group Limited and Deshbandhu Holdings Limited, has been signed a land lease agreement.
Rick Haque Sikder, Chairman of PowerPac Economic Zone Private Limited and Golam Rahman, Managing Director of Deshbandhu Group Limited and Deshbandhu Holdings Limited, signed the deal at Sikder Group head office in the capital on Tuesday. Top officials from both the companies were present, said a press release. Under the deal, Deshbandhu Group has taken 33 acres of land at Mongla Economic Zone for setting up PSF, PET and Corn Gluten manufacturing plant (ethical financial project) to support the prevailing requirements by their overseas buyers. The plant will help increase employment opportunities and play a major role in the improvement of the national economy. PowerPac Economic Zone Private Limited is the first company that was awarded with a license for 50 years to design, build, finance, own, operate and transfer (DBFOOT) 205 acres of land of Mongla Economic Zone in Bagerhat under the public-private partnership (PPP) model with, the support of Bangladesh Economic Zones Authority (BEZA). Mongla Economic Zone is the most lucrative economic zone in Bangladesh for its strategic location. The zone is situated within one-kilometer radius of Mongla Port, which is the second biggest seaport in the country. The proposed Khan Zahan Ali Airport is located only 20 kilometers away from the zone. The Padma Bridge, after its opening, will make the most time-efficient transportation by road and rail communication to the south-west part of Bangladesh. This will play a vital role in increasing the demand for Mongla Economic Zone as well as Mongla Port.