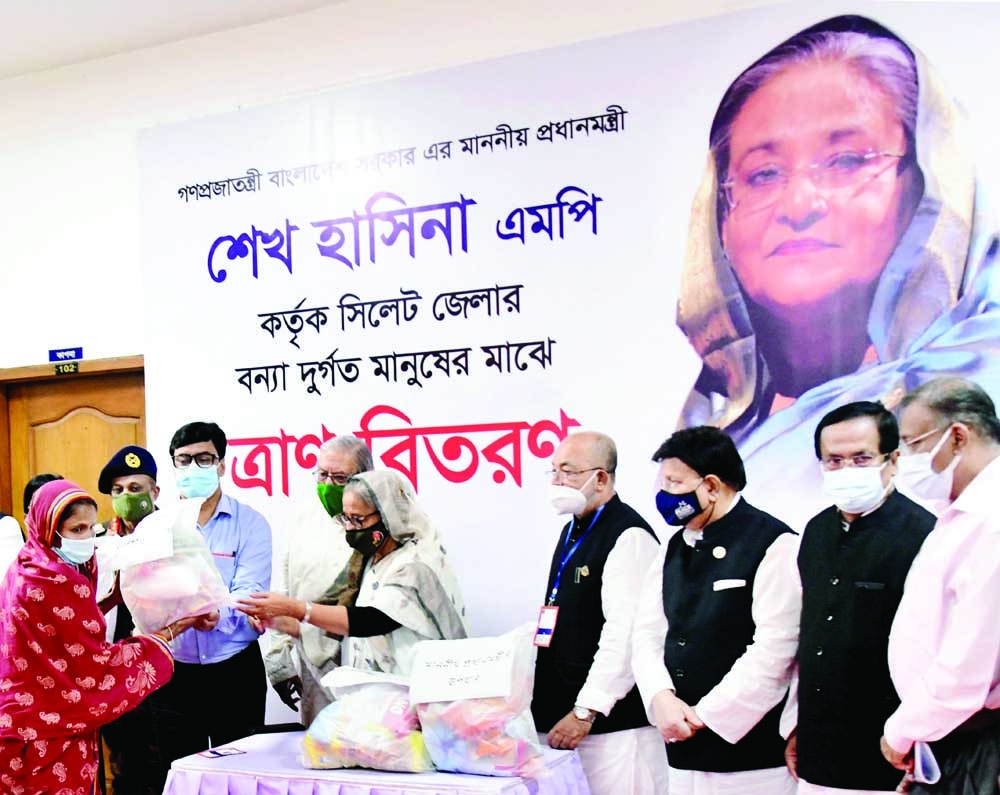 News Desk :
Prime Minister Sheikh Hasina on Tuesday said her government will provide all necessary assistance, including food medicines and seeds, to the flood-affected people in the north, urging them not to worry.
At the same time, she urged the authorities concerned to take necessary preparations to face any possible crisis as flood waters rolling from the north are now likely to hit the middle and southern parts of the country.
The premier was addressing a view exchange meeting with public representatives, high officials of the government, political leaders and officials of the local administration at Sylhet Circuit House, reports UNB.
She held the meeting after inspecting from a helicopter the ravages wreaked by the early monsoon deluge in the districts of Sylhet, Sunamganj and Netrokona. She flew low to get a better view of the condition of the marooned people and the damages caused by the floods.
PM Hasina firmly said that her government has taken all necessary steps to face the current flood situation in the entire Sylhet region as well as other parts of the country.
This is the third consecutive time that Sylhet region is experiencing floods, she said adding that the government is doing its part accordingly to face the situation.
Describing the current flood as nothing new, she said, the people of Bangladesh have to live with such natural calamities.
She reminded the audience that while such severe floods cause damages, it also has some positive aspects.
Flood waters, she said, bring in silt that makes land more fertile and monsoon rains help recharge the underground water that is good in the earthquake-prone country.
The PM thanks the officials of the administration, members of the armed forces and coast guards as well as leaders and workers of her party Awami League for standing beside the people risking their lives.
She particularly mentioned the leaders and activists of her party who always remain beside the affected people in all kinds of disasters.
She also advised the rescue and relief workers to ensure their own safety too.
Referring to the big floods of 1998 and 1988, Hasina said it's a natural pattern that massive floods happen in every ten or twelve years in Bangladesh.
She put emphasis on regular dredging of the rivers and the use of the silt for other purpose like making block bricks.
Talking about construction of roads in the haor areas, she mentioned that she has already given instructions that there will be no more normal roads in Haor areas like Sylhet, Sunamganj, Netrokona and Kishoreganj with traditional land fill and pile up roads.
"It will be elevated roads from now. These types of roads do not get damaged quickly and even in calamities like floods the communication remains smooth."
She said that elevated roads would help protect the region from water logging that leads to huge seasonal floods.
Hasina warned that floods now may happen in the middle parts of the country next and later on in the southern part and all concerned will have to remain ready to face the situation.
Talking about the situation during and after floods, the PM said, the government will provide the affected people food, water purifying tablets, oral saline and bleaching powder.
She said during the post-flood period necessary assistance such as seeds and other inputs will also be given to farmers to help cultivate their lands and grow crops like paddies.
She asked the officials to spread bleaching power in the affected areas after the flood water recedes to prevent any outbreak of diseases.
She also put emphasis on removing all wastes and garbage after the recession of floods.
Later the PM heard some local leaders who highlighted problems of the area and put several demands for development of the Sylhet region.